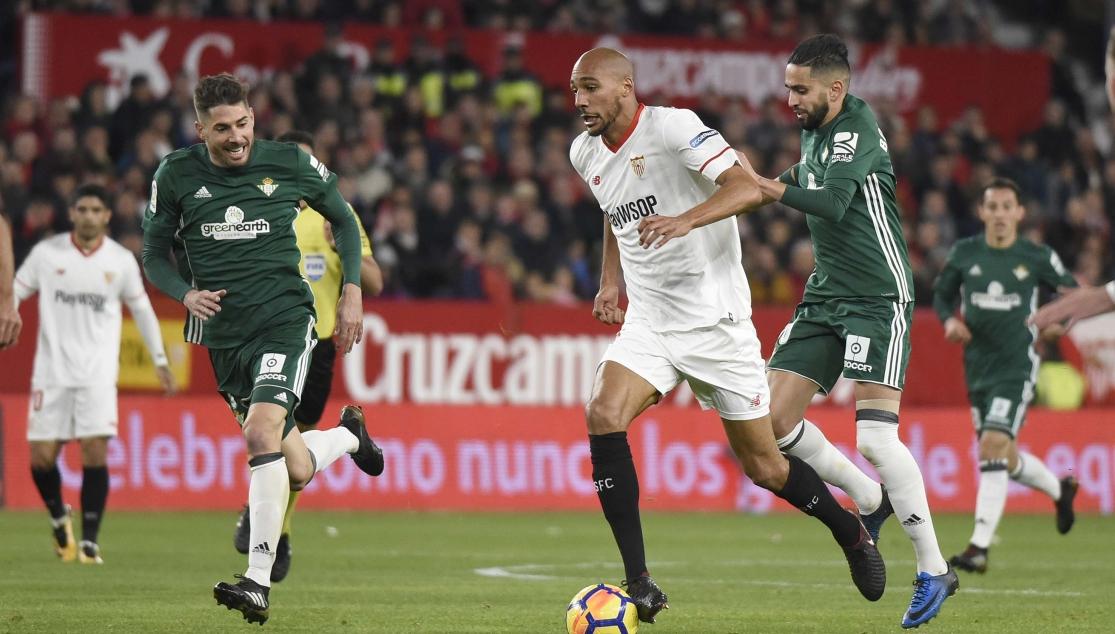 A FINAL TO WIN ON RIVAL GROUND

The stakes couldn't get much higher in the latest instalment of El Gran Derbi. With Sevilla needing four points from their last two games to guarantee European football next season, failure is not an option on enemy soil; the Caparrós effect will need to show all its potency

This Saturday the 12th of May, Seville stops its clocks for one day, puts aside cross-city pleasantries and turns its attention to one of the highest-stakes matches of the La Liga calendar year. As Sevilla look to make it three wins out of three under Joaquín Caparrós, they are also gifted with the chance to prove their local superiority and take a huge step forward in the race for European football. A fiery and dramatic celebration of Sevillian football is guaranteed as Betis host the Nervionenses, Sevilla will not be found wanting.

It's been twelve years since Sevilla lost on away ground in El Gran Derbi (literally translating as 'the great derby') - with five draws and three wins - and if there was ever a time to make it thirteen, this would be it. Betis have guaranteed themselves European football for 2018/19 and Sevilla need four points from the remaining two games of the season to do the same. A third successive La Liga win has to be seen as the ideal way forward - avoiding a loss the bare minimum.

If momentum is anything to go by, the derby could not have come at a better time for a Caparrós side that just this Wednesday proved they are capable of defeating any side with the right attitude and energy. Triumphing against Zidane's Madrid in a 3-2 classic which, if anything, flattered Real with it's scoreline, Sevilla showed that the 'Caparrós effect' is very real indeed and that a confidence boost was just what the team needed to overturn their winless streak. A repeat performance is exactly what the doctor ordered against the eternal rivals, who come into the game in good form but with doubts of their own to overcome.

The green and whites, who many have made favourites for this latest enthralling derby have picked up seven wins, one draw and just one defeat in their last nine matches (coming at the San Mamés, when losing 2-0 to Athletic Club Bilbao). On home soil they have 10 wins out of 18, drawing three and losing five - three of which have come in total goal-fests (Valencia 3-6, Barcelona 0-5 and Real Madrid 3-5) and two by slimmer margins (0-1 to Atlético Madrid and 0-2 to Athletic Club once again). Defensive performances meanwhile have gone from strength to strength, though they have conceded more at Villamarín than away from home (29 to 27).

And it's defensive solidity that could make the decisive difference when Sevilla step onto enemy soil. Joaquín Caparrós was eager to remind the world that chances always come in the build-up to the Madrid game, emphasising that a clean sheet always has to be the first priority in such fixtures; one can imagine he will be sending the same message to his players today. Having already shown he can set up the side for an organised defensive performance - when not conceding against Real Sociedad and when truly unlucky to concede twice against Madrid - a focused and tight back-line will undoubtedly be Sevilla's base.

From there, you can only imagine that the excitement of a grand occasion will do the rest. Though legs will undoubtedly tire - Sevilla having played their last match only a matter of hours ago - with local bragging rights, ground in the Europa League race and the opportunity to do the badge proud on the line, the Nervionenses will want to remind the city that there is only one owner of the Gran Derbi... and they don't play in green and white.