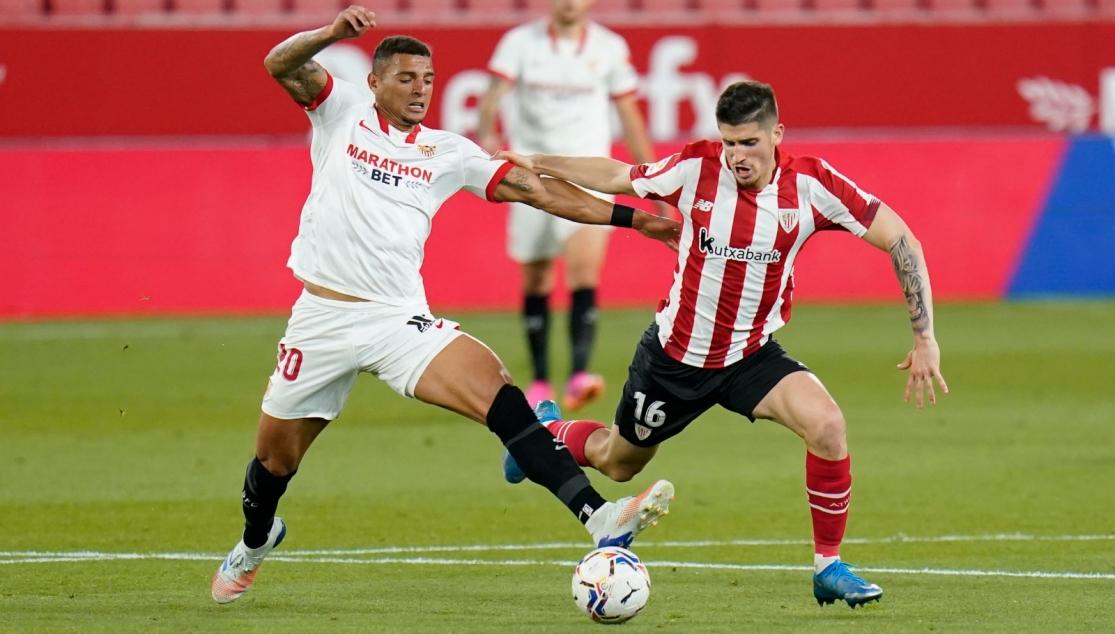 0-1: SEVILLA FC FALL IN THE LAST MINUTE AT HOME TO ATHLETIC CLUB

Sevilla pushed incessantly for the goal that would keep the three points in the Sánchez-Pizjuán, but Unai Simón was in top form

A defeat, six straight wins later, for Sevilla FC in La Liga in a game in which the Nervionenses dominated their opponent throughout, but they were up against an inspired Unai Simón in the first half and suffered from a lack of clinical finishing in the second. Bilbao managed to keep Sevilla's efforts out and kept themselves in the game, allowing Iñaki Williams the chance to score in injury time to condemn Sevilla to defeat.

Sevilla could have went into the break a number of goals up. The Blanquirrojos dominated possession and had numerous occasions around Bilbao's box. Ocampos had the first opportunity, coming onto a Suso cross from the right. Rakitić was up next and had a clearer chance and sent a shot just wide of Simón's left-hand post.

Unai Simón prevented a first-half goal in two very clear chances from En-Nesyri, a header and a low shot from the edge of the area.

It was the Basque goalkeeper who would become his team's saviour, saving the two clearest chances for Sevilla, both for En-Nesyri, one from a powerful downward header and the other from a shot inside the area. Athletic Club tried at times to break away from Sevilla's dominance and threaten Bono's goal, but they barely managed to with the exception of a couple of free-kicks. Sevilla FC had one more chance to open the scoring, but a good combination between various attackers failed to finish with a shot.

The second half began with Athletic Club slightly better positioned in their own half, preventing the dominance that Julen Lopetegui's side had previously enjoyed. Despite not troubling Bono, the Rojiblancos did manage to stop Sevilla's attack and neutralise the advances of Jesús Navas and Acuña. Asier Villalibre got the better of Koundé and fired a shot at Sevilla FC's Moroccan goalkeeper in the only threat of the first twenty minutes of the second half. For the home side it was Ocampos, with a deflected bicycle kick, and Rakitic, shooting high, who tried their luck.

Athletic's only chance came in a counter-attack with Sevilla FC completely intent on a goal.

After 75 minutes, Sevilla FC began to push for the goal, completely pinning Athletic back in their half and completely dominating possession of the ball. Lopetegui made changes and the Nervión side were constantly in Bilbao's half. Acuña tried his luck with a good shot from the edge of the area, once again deflected by Unai Simón. The Sevillistas were pushing forward with their hearts, but their legs were beginning to fail them after many efforts to get ahead on the scoreboard. With practically the whole team pushing forward, Athletic's goal came as a blow. A very well executed counter-attack by Sancet, practically one on one against Fernando, left Iñaki Williams, who had come on in the second half, on his own and beat Bono with a perfect shot.

That was the end of the game for Sevilla FC, who had a very good chances in the first half and who died pushing for the goal, knowing the importance of the three points. Sevilla visit Real Madrid next Sunday at Valdebebas, in what will be the Matchday 35 in La Liga.