Sevilla’s only league title to date came in 1946, against Barcelona no less, who needed to win and could only manage a draw 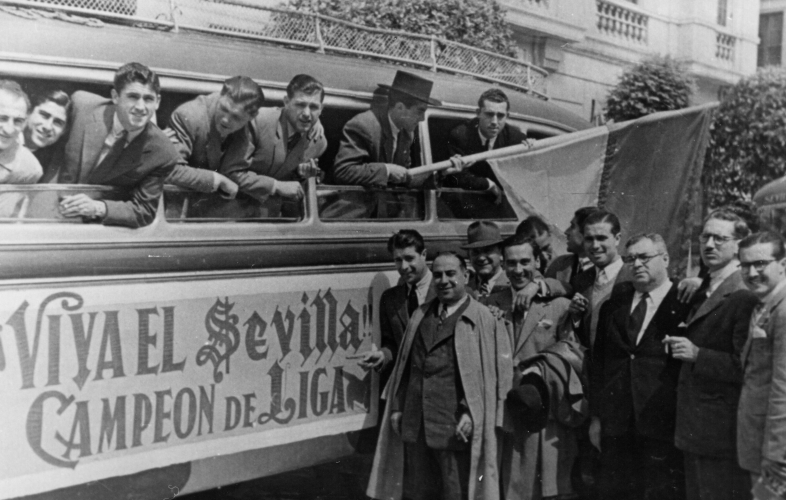 The week of the 24th May 1946 was without doubt the most important for Sevilla, as it started with Barcelona on 34 points and Sevilla leading with 35. Barcelona needed to win while a draw was enough for the Andalusians. There was a full house at the Estadio de Las Corts, and some 500 Sevilla fans travelled to witness their team’s triumph.

When in the 7th minute a cross from López was headed into the Barcelona net by Araujo, all that could be heard in the stadium were the cheers of the 500 travelling fans, while in the stands you could hear a pin drop. In the 63rd minute Bravo equalized for Barcelona and the home fans began to push their team on to find the second goal which would have handed them the title. But their efforts were ultimately in vain, and the following day the press, both in Barcelona and the rest of Spain, conceded that Sevilla had deservedly won the title and that the point they earned at Les Corts was just reward for an enormously impressive season. 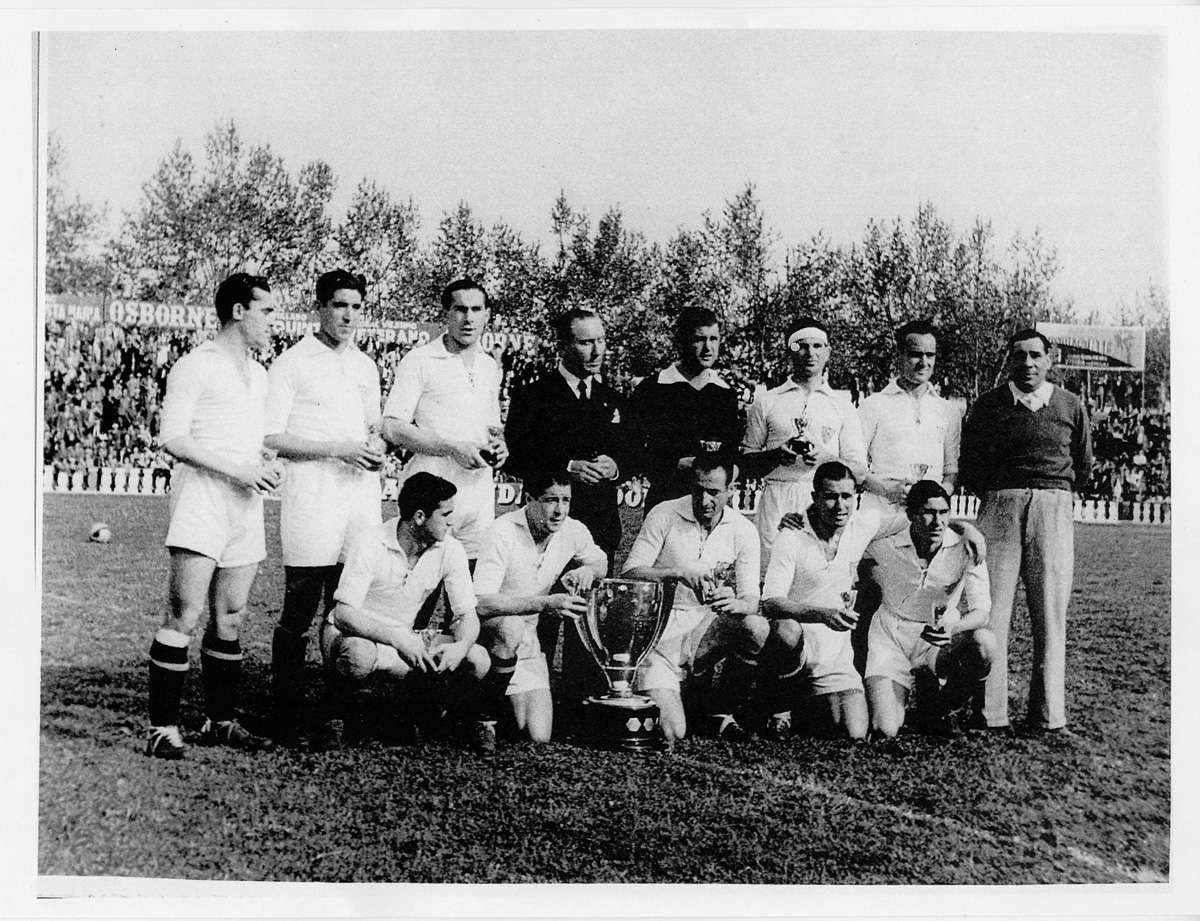 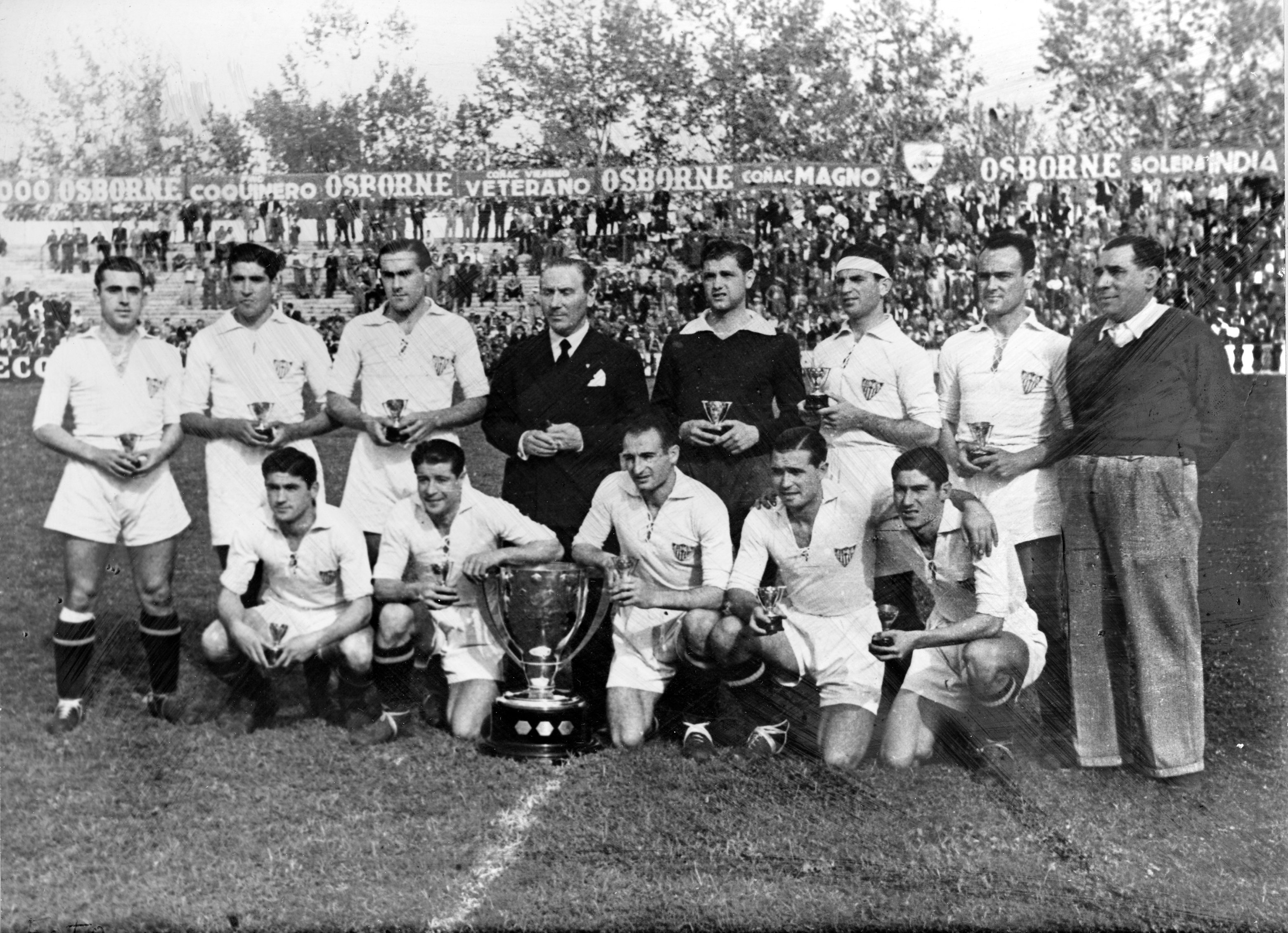 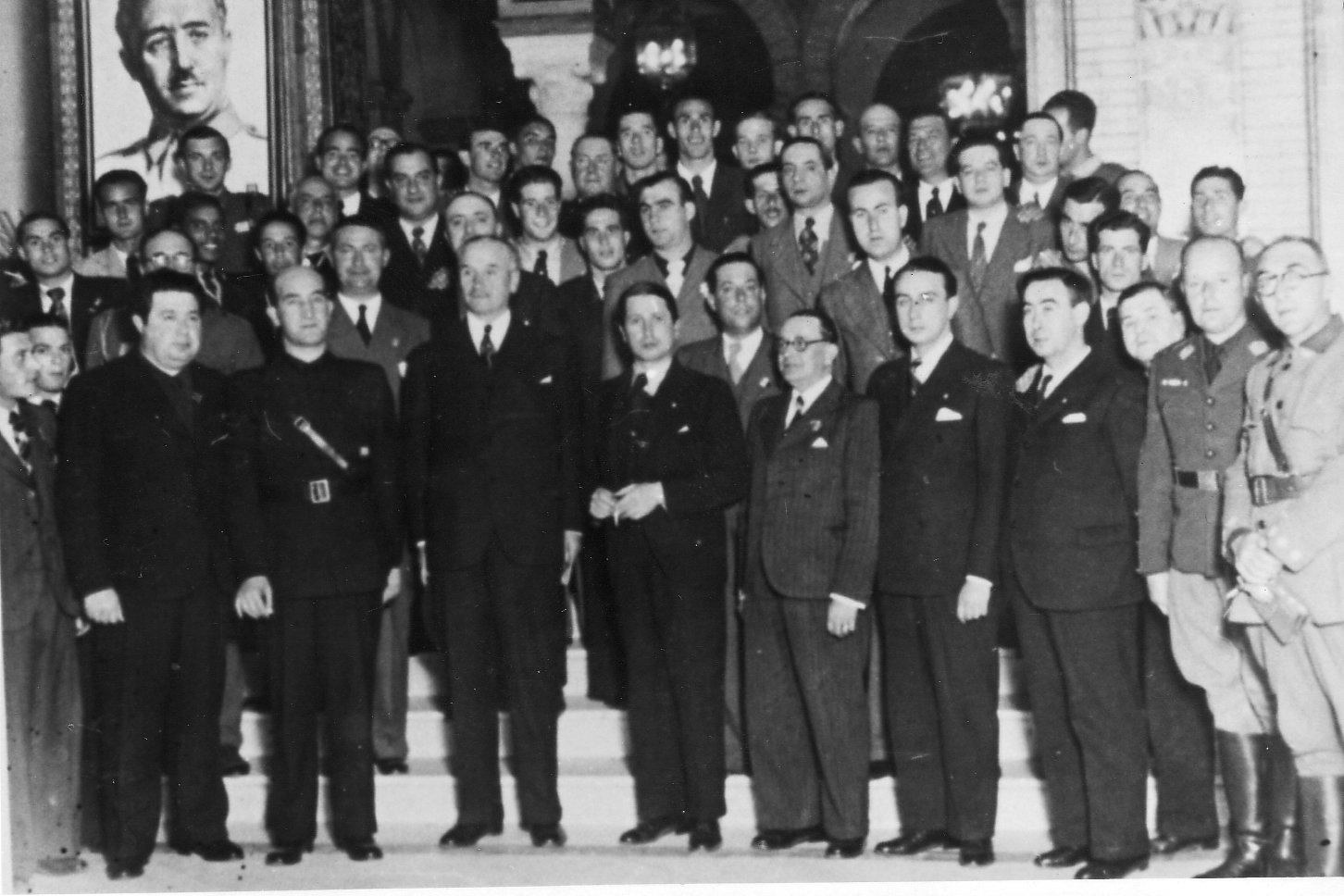 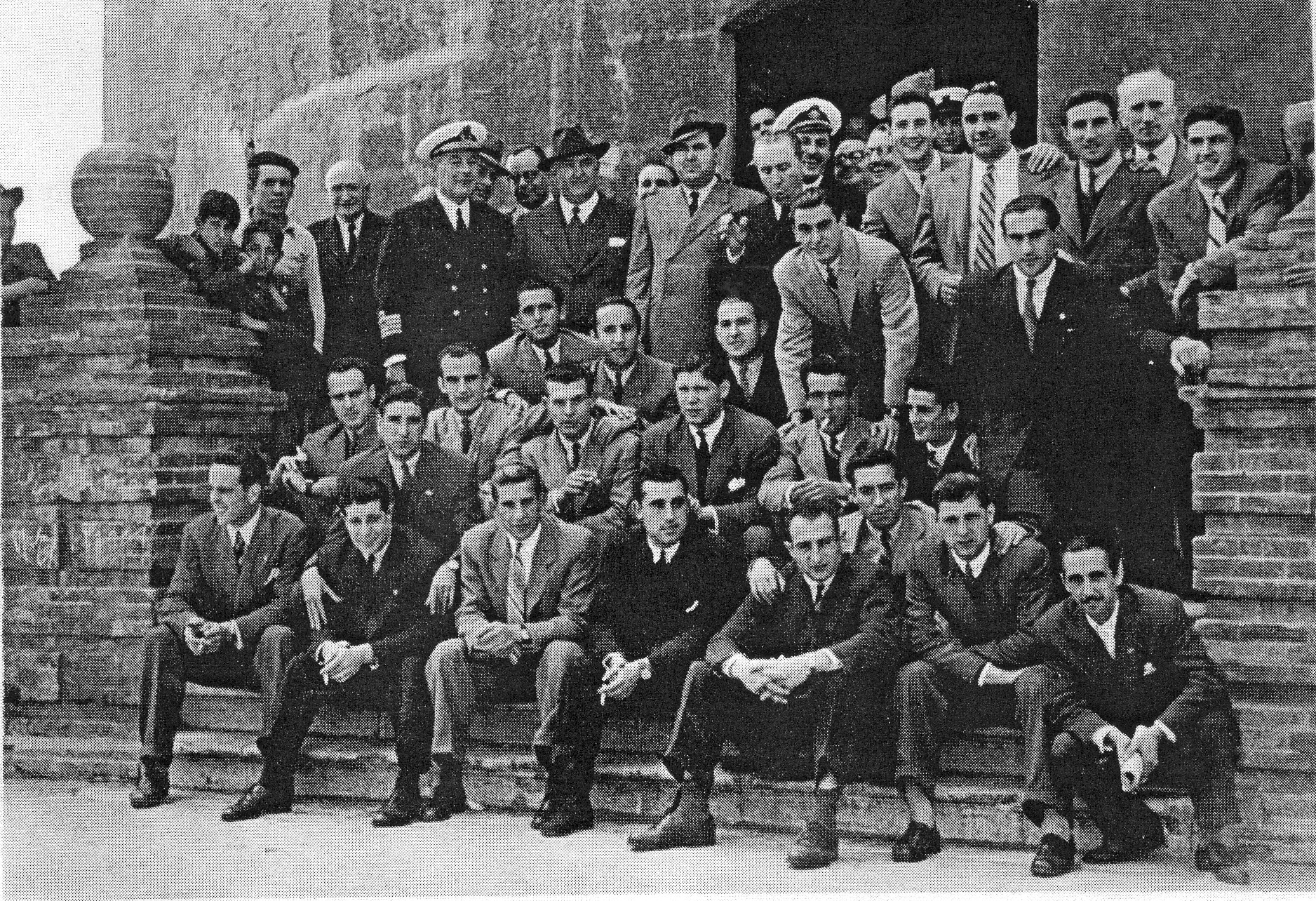 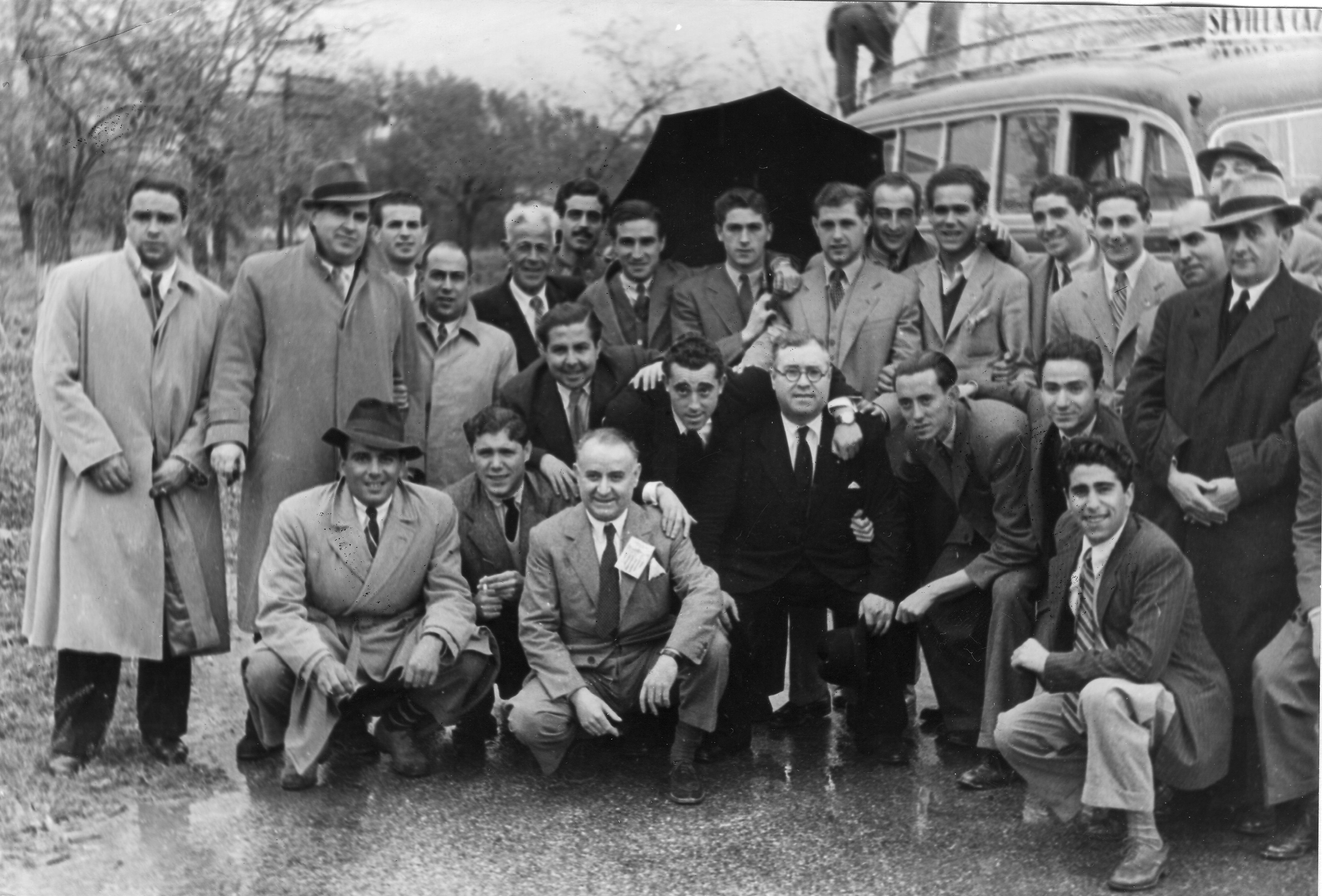 The return of the league champions to Seville was certainly memorable. They stopped in every city they were invited to, including Córdoba, and in Carmona there were thousands of Sevilla fans there to welcome the champions and to accompany them, forming a group of buses, cars, motorbikes and even bicycles. There was another stop off in Joaquín’s home town, Alcalá de Guadaíra, where there was such joy and excitement that the town hall called a holiday due to the size of the celebrations.

The celebrations in Seville were no less impressive. Every balcony from the Puerta de Jerez to Plaza Nueva had been decorated with the team’s colours. The mayor gave every player and member of the coaching staff gifts, among which was a gold watch with the crest of the city on it. A number of Sevillian businesses also got involved and gave gifts to the players. Every player received a leather wallet with 1,000 pesetas inside.

The trophy presentation took place seven days later at a tribute match played at the Estadio de Nervión between Sevilla FC and Granada CF. Sevilla FC ran out 4-0 winners, but the result was a sidenote, with the best part of the day coming when Pepe López, Sevilla FC captain, received the trophy from the President of the Spanish Football Federation, Javier Barroso.

GENERAL:1945/46 season. Match played on 31 March 1946 in Barcelona in front of roughly 500 Sevilla fans who travelled to the Catalan capital.