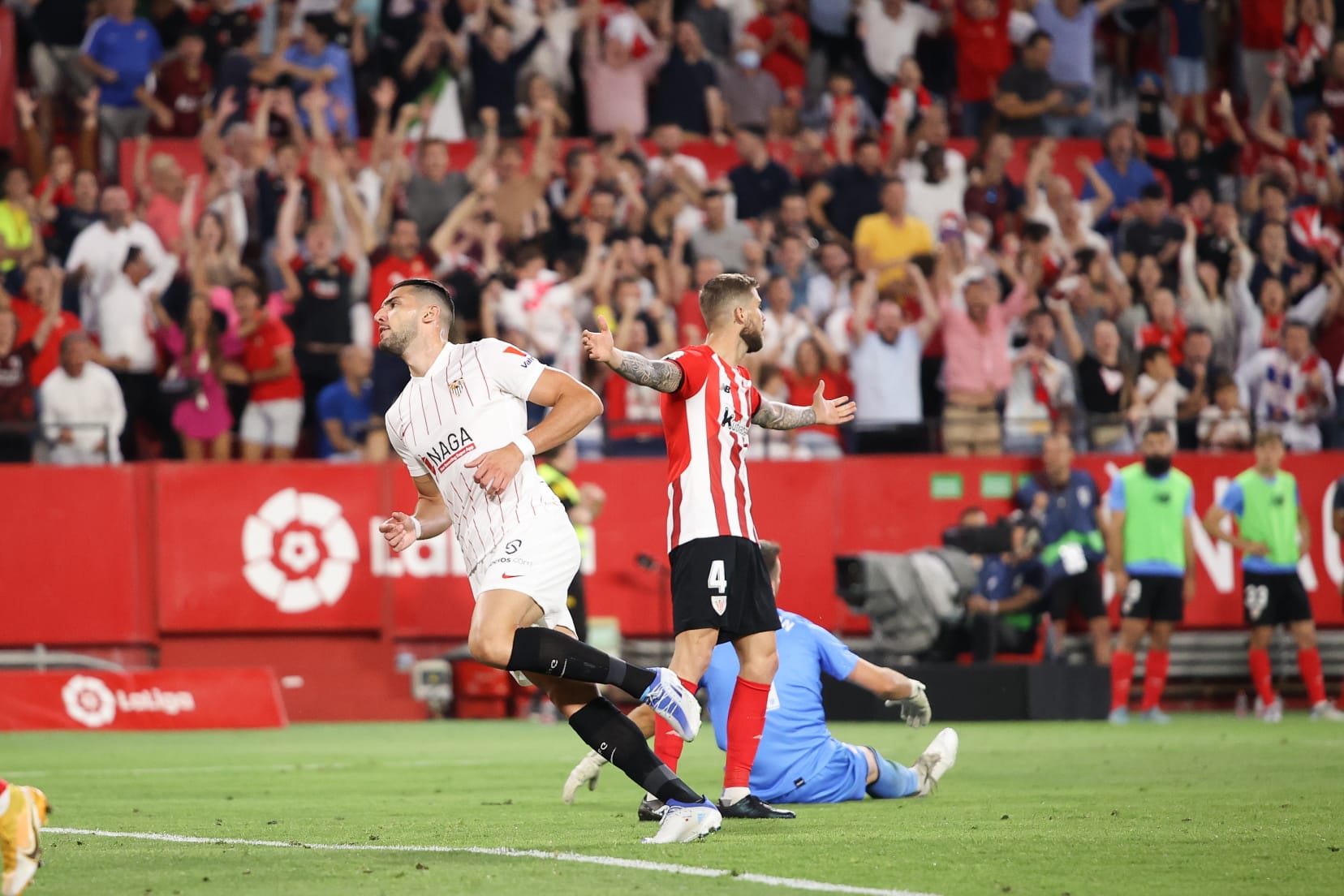 1-0: RAFA MIR SCORES TO ROUND THE SEASON OFF ON A HIGH

While the main objective of Champions League qualification had been secured, the team could have finished third tonight, overtaking Atlético Madrid. There was a bit of drama at the end but Simeone’s side did end up winning in the Reale Arena to finish in the top three. However, that didn’t take away anything from the party atmosphere at the Ramón Sánchez-Pizjuán which saw the team send the fans off in the best way possible. It was another 1-0 win for the hosts, although it could have been more, while Athletic's failure to win did not affect their European hopes, due to the fact that Villarreal's win made it mathematically impossible. Rafa Mir's goal from a great team move secured a deserved win to round off an action-packed season. However, most importantly, the club achieved its objectives despite a number of adversities along the way.

The stakes were higher for Athletic, but it was Sevilla who wanted the win early on. It took just two chances for the team to have their first chance. Tecatito's ball in from the left found En-Nesyri, but his one-on-one effort went over the bar. Lamela's effort in the tenth minute came even closer, after a perfect cross from Acuña on the left. His header had the beating of Unai Simón, but unfortunately it came back off his left-hand post. Óliver then had a chance with a driven effort, but the match began to calm down after a frenetic start. Marcelino's side did have chances, mainly through the older of the Williams brothers - Nico was injured. He had their first opportunity with an effort on the volley, but it went well wide of Dmitrovic's goal.

VAR disallowed goals from both Berenguer and Rekik

Soon after Sevilla, in an attempt to play out from the back, surrendered possession to Yuri who barged his way through, first by cannoning a shot onto Koundé and then blasting the ball home low and hard past Dmitrovic. What seemed to be the opening goal of the game was then disallowed by VAR for hand ball as the ball bounced back up onto the centre-back's hand from the shot that hit Koundé. Del Cerro Grande, in his farewell to his career as a referee, went over to the screen to confirm the decision. From there until half time, both sides had chances. Berenguer found himself on the edge of the area but his shot went over the bar. Sevilla's chance fell to En-Nesyri, who was unable to hit the target as he found the side netting.

At half time Diego Carlos was forced off with an injury and Rekik came on and it wouldn’t take long for him to be involved. When the game got back underway there was a lot of chances in the penalty areas. First with a shot off the post for Williams that he nearly took advantage off after a rebound off Dmitrovic following a shot from Berenguer. Shorty after at the other end Lamela had a shot that deflected off an Athletic player and looped into the air. After the goalkeeper was unable to clear the danger, the ball fell to Rekik on the penalty spot from where he couldn’t fail. Unfortunately, in the first shot from Lamela, Koundé was offside and this forced an intervention from VAR which ruled out the goal. The next attempt was from En-Nesyri, who one on one, sent his shot wide. It was the last involvement for the Moroccan who was then substituted for Rafa Mir.

Midway through the second half, the substitution paid dividends. After some good work on the right flank, Lamela sent a ball forward. Tecatito was offside, but he let the pass run through for Rafa Mir, who raced onto the ball and beat Unai Simón at his near post. Sevilla's opener came at the same time as Atlético's second in the Basque Country, and with Villarreal leading at the Camp Nou, neither Sevilla nor Athletic could finish third or seventh respectively. Ocampos, Papu and Rakitic were all brought on as the team looked to seal the win, while the match slowed down as it neared its end. Athletic looked for a late equaliser, while Sevilla defended well to finish the season off on a high. The team finished the season not just with the goalkeeper who conceded the fewest goals, but also the fewest goals on a team level.

The team will now have a very deserved rest before returning for pre-season in July, as they approach another exciting season in the UEFA Champions League. The campaign will be a very different one, with a break before Christmas due to the FIFA World Cup in Qatar, while there will be incomings and outgoings in Nervión, like every year.