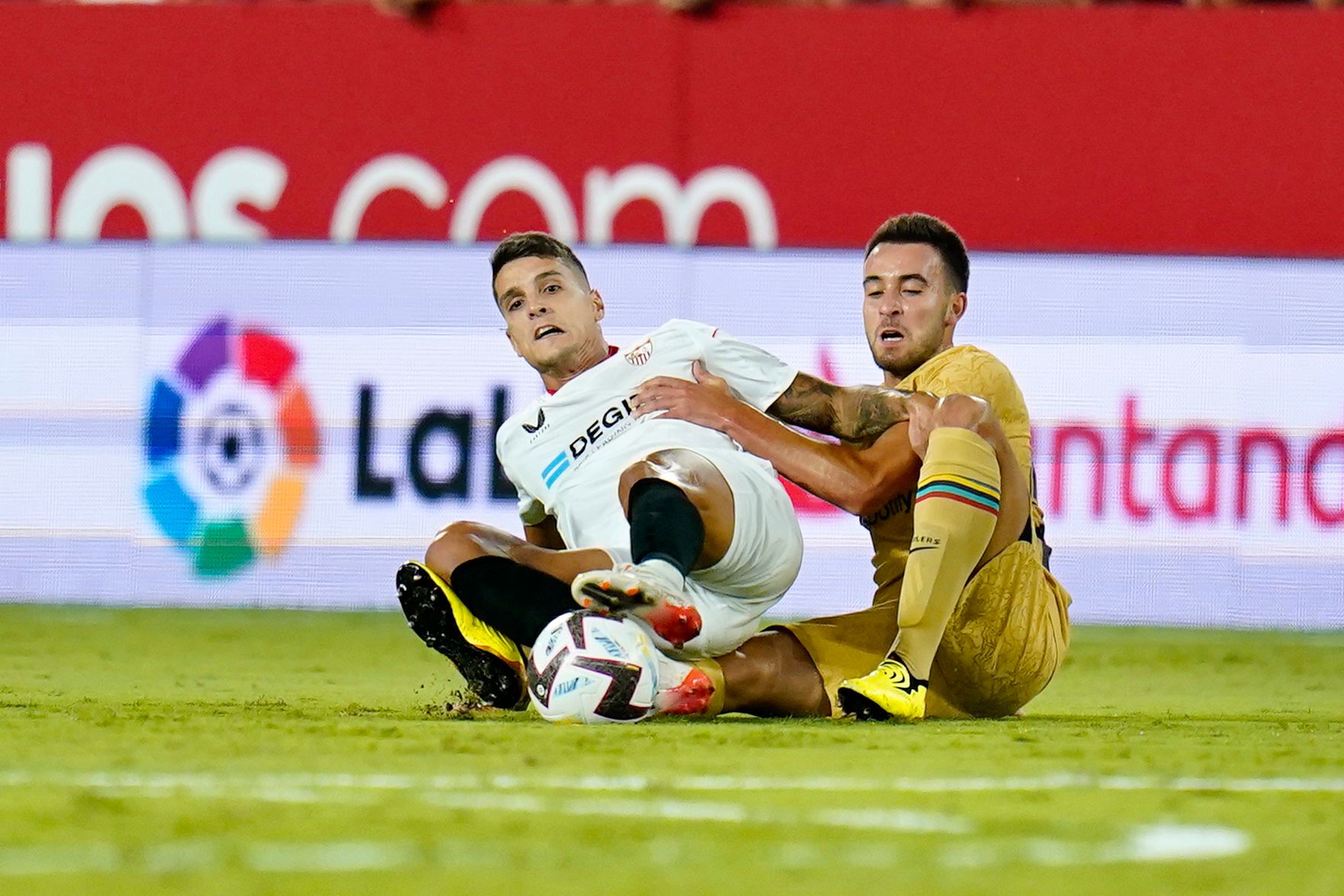 Entradilla
Despite Sevilla's great start, they could not find the goal and Barcelona scored with their first chance.
Cuerpo Superior

Defeat for Sevilla tonight against FC Barcelona. Xavi's team withstood Sevilla's attacks at the start of the game and scored with their first chance of the game, before adding another prior to half time.

Raphinha opened the scoring following a counterattack before Lewandowski added a second. The third would come in the second half from Eric García.

The fans were brilliant from the off as they sought to push the team on. Isco showed great quality four minutes in as he held up the ball before threading through Ivan Rakitić, but the Croatian fired at Ter Stegen.

Lamela would have the ball in the back of the net but he was ruled offside. En-Nesyri had two great opportunities, in addition to Isco, but they were adjudged offside as well.

Raphinha opened the scoring after a good Sevilla start

Acuña then had a chance after a well-worked counter attack by Lamela, but he fired wide. However, Barcelona punished Sevilla for their missed chances at the first opportunity.

Dembelé broke forward at pace and played in Lewandowski. His shot was cleared off the line by Fernando, but Raphinha was on hand to prod the ball home.

The Brazilian nearly had a second when his shot from the edge of the area went narrowly wide, but his miss did not prove costly as Lewandowski doubled the visitors' lead a few minutes later. Koundé's cross found him unmarked on the edge of the area, and the Polish international made no mistake.

The visitors nearly bagged a third on the stroke of half time, again on the counter attack, but Dembelé could not get the better of Bono.

Despite two substitutes at the break, with José Ángel and Delaney coming on, Barcelona scored a third. Once again, it came via a Koundé assist, as he played in Eric Garcíá for an easy finish.

Barcelona made the most of their chances in the first half

More changes followed, with Suso making his return from injury and Dolberg coming on for his debut. However, the outcome was never going to change. Lewandowski nearly scored his second just before he was substituted, but Bono was able to deny him.

Papu Gómez was heavily involved in the game once he was brought on in place of Isco, but Sevilla could not find a way through, while José Ángel put in a strong showing in defence after his introduction at the interval.

After a tough start to LaLiga, the team now have less than 72 hours to prepare for their Champions League opener, which is on Tuesday against English champions Manchester City.