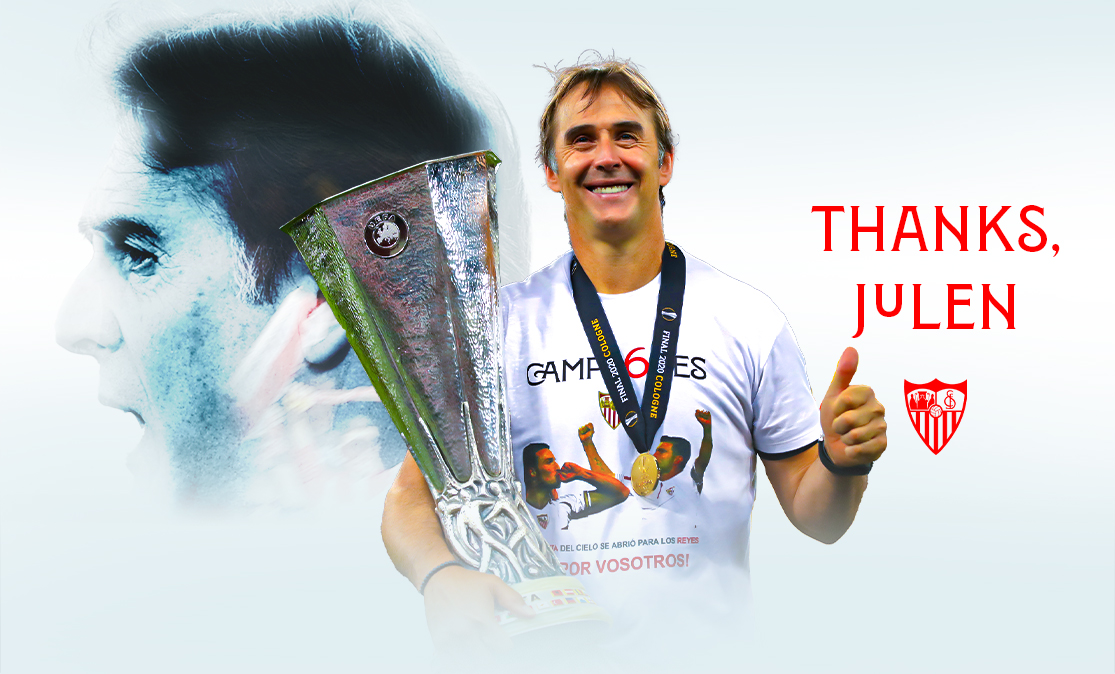 JULEN LOPETEGUI RELIEVED OF HIS DUTIES

Entradilla
Julen managed 170 games at the helm of the club. He leaves having achieved a UEFA Europa League title, the club's top flight points record and a Zamora Trophy won by Bono
Cuerpo Superior

Sevilla FC have relieved Julen Lopetegui of his duties as first-team coach following our clash against Borussia Dortmund.

It brings an end to a successful period with three magnificent campaigns in which the club achieved their objectives and a fourth season where unfortunately the results have not gone our way, with the club taking five points from a possible 21 in LaLiga.

In total, Julen took to the Sevilla FC dugout on 170 occasions: 121 LaLiga matches, 15 in the Copa del Rey, 16 in the Europa League, 17 in the Champions League and one in the UEFA Super Cup.

This makes him the coach with the fifth most official matches in Sevilla's history behind Joaquín Caparrós, Unai Emery, Manolo Cardo and Ramón Encinas.

He has 89 wins, 45 draws and 35 defeats, which also puts him in third place in terms of wins, behind only Caparrós and Emery.

Lopetegui will forever remain at the top of Sevilla FC history for his brilliant achievement of a sixth UEFA Europa League title in the 2019/20 season, his first in charge, which brought him into the prestigious group of seven coaches who have lifted a trophy with the club.

He has also achieved the historic milestone of three consecutive Champions League qualifications via LaLiga, with a total of 222 points from 121 games.

He also helped Sevilla FC to achieve their record points total to date in the top flight with 77 points in 2020/21, as well as the first Zamora Trophy in our history with Yassine Bono last season.

Sevilla FC have offered Julen Lopetegui the option of a public farewell at the Ramón Sánchez-Pizjuán.

The club wish to underline and thank the Basque coach for his professionalism and hard work in the more than three years he spent at the club, as well as wishing him the best of luck and the best of success in his future endeavours.