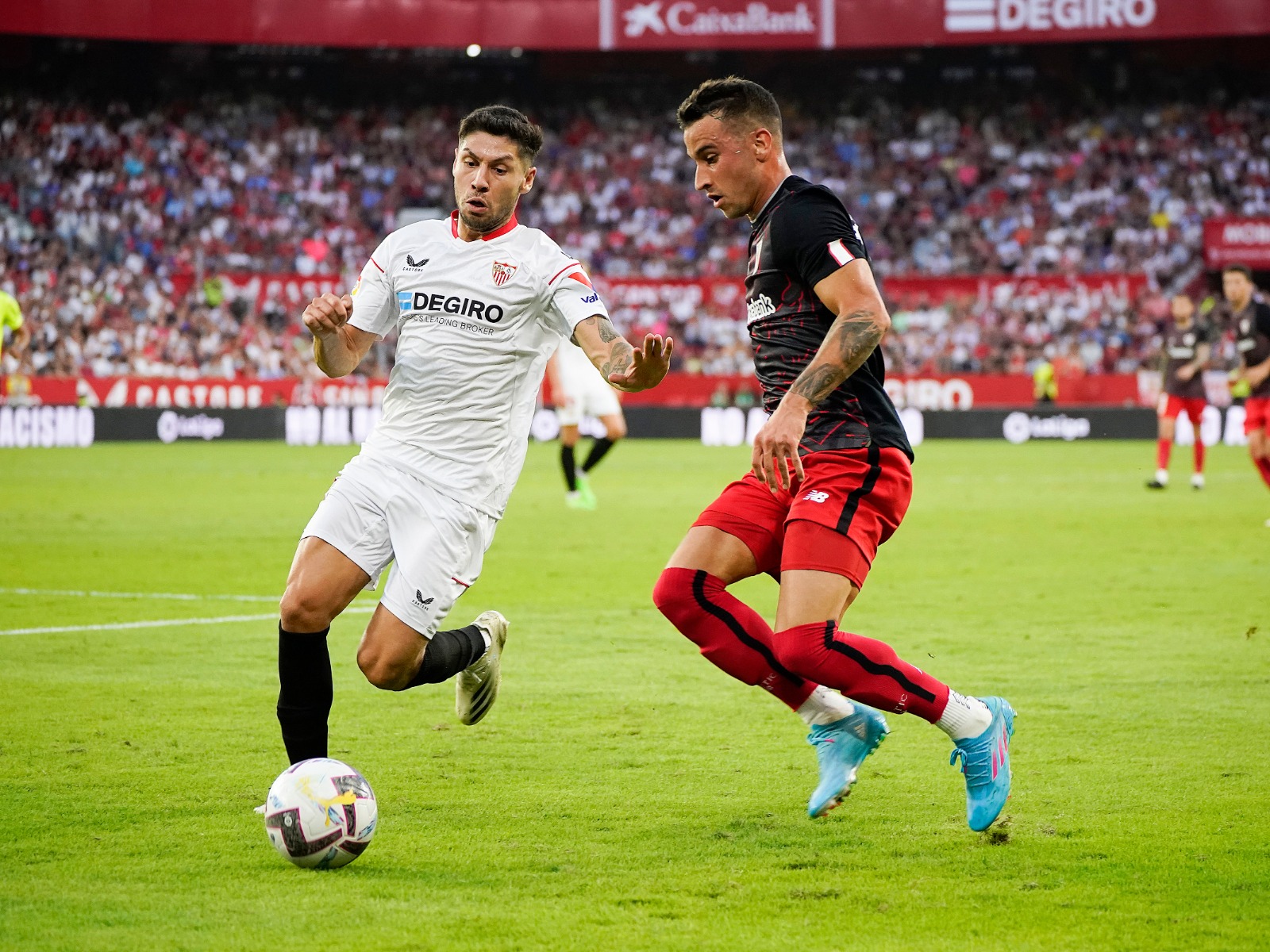 THE SECOND SAMPAOLI ERA STARTS WITH A DRAW AGAINST ATHLETIC

The points were shared at the Ramón Sánchez-Pizjuán in Jorge Sampaoli's return to the Sevilla FC dugout against Athletic Club.

Marcão made his debut at the back as a new addition to the Sevilla ranks, and Sevilla FC now have a sixth point in the league table.

It took three minutes for Sevilla FC to open the scoring in Sampaoli's first game in charge, with Dolberg and Óliver Torres combining following a move down the right flank. Montiel went past Papu on the overlap, who lifted the ball deep into the area and, with the Argentinian's elivery, the Danish striker laid it off for Óliver Torres, who once again found the net and sent the Sánchez-Pizjuán into a frenzy.

Sevilla's momentum didn’t end there, and three minutes later Papu forced Unai Simón to keep out the home side's second after a good strike. Sevilla FC had the upper hand on the scoreboard and put a spanner in the works of Athletic Club’s plans.

Papu could have increased the lead before the break, but his effort from Montiel's pass was saved by Unai Simón

Athletic, while they managed to win the ball back more off Sevilla, created little danger on Dmitrović's goal, other than an effort from Berenguer.

Nico Williams was the danger for Athletic down the right wing and managed to get Telles into the book after a dribble.

Just before the break, Sevilla would have a clear-cut chance to increase the advantage but Unai Simón stood tall to deny Papu who was found after a clever pass from Montiel.

Valverde's team were soon on the attack again, as Munian would have another effort that he ended up sending over.

Sevilla were having difficulty keeping hold of the ball and Sampaoli made his first changes of the game as he brought on Marcos Acuña and José Ángel Carmona.

The away side were incessant in their hunt for a goal and made life really difficult for Sevilla who really struggled to weather the Athletic storm.

Just as we had our best spell of the second half, Vesga equalised for the visitors

We then responded with a much stronger spell and began to take control of the match like we had done in the first half. Two counter attacks resulted in opportunities for Papu, but both of his shots went just wide.

However, as we had our best spell of the game, Athletic levelled. Gudelj's clearance from a cross fell to Vesga, who fired into the bottom corner from distance.

The Basque side took control of the clash after their equaliser. Nico Williams saw an effort denied by Dmitrovic's foot, before his older brother fired a shot narrowly over the bar.

However, if any side looked like scoring in added time, it was definitely Sevilla. Lamela went close to bagging the winner in the 93rd minute when the ball fell to him just outside the area with an open goal, but Ander Herrera brought him down and was dismissed.

The resulting free-kick was deflected wide for a corner which was nearly converted, but, unfortunately, neither Delaney, Gudelj nor José Ángel could steer the ball home.