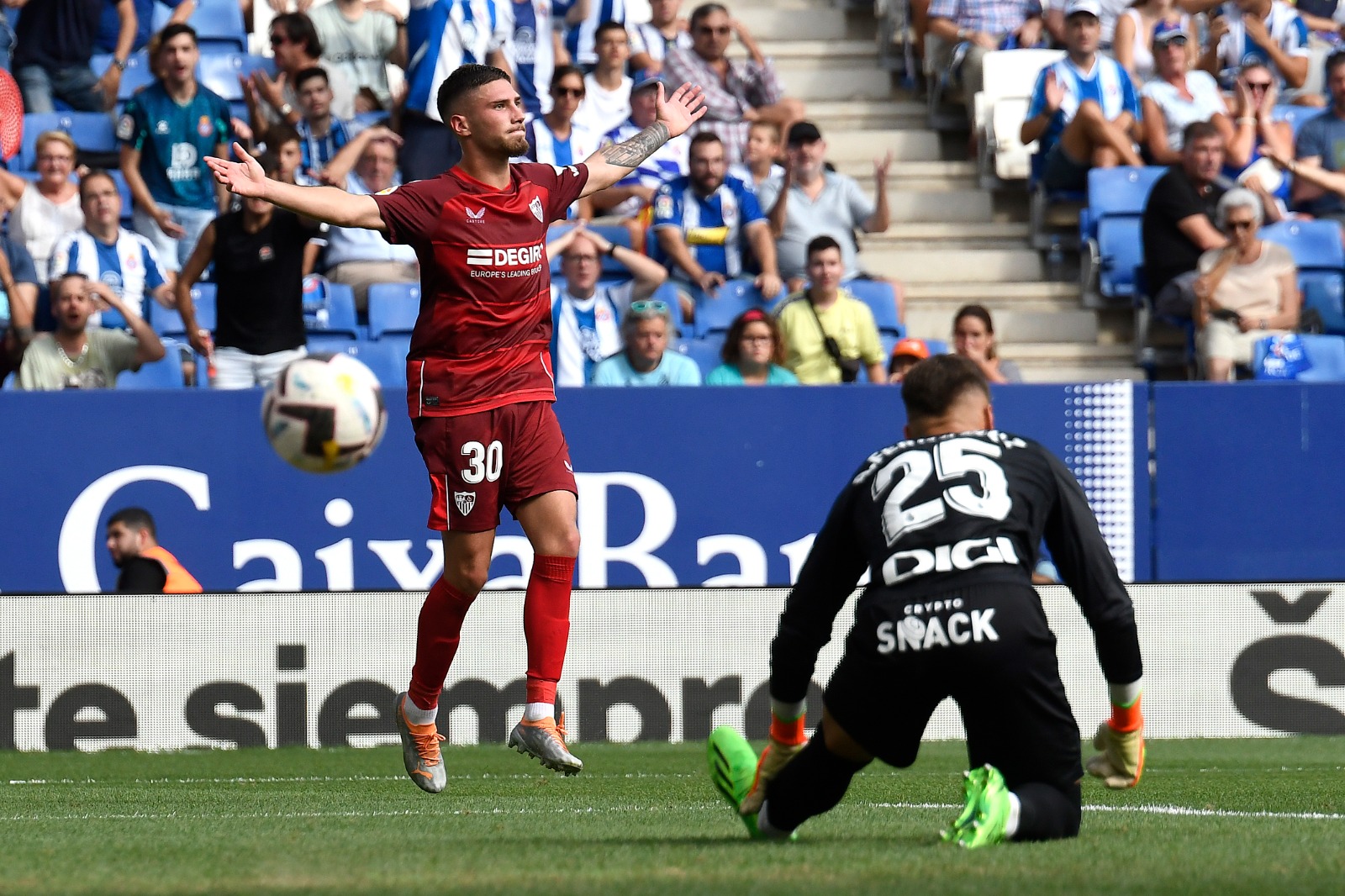 2-3: A HARD-FOUGHT WIN AT CORNELLÁ

Entradilla
A first-half brace from José Ángel and a goal inside a minute from Lamela were enough for the team to get their first win of the season, but they had to dig deep to hold on for all three points
Cuerpo Superior

Sevilla FC picked up their first win of the season, but were made to dig deep as they came out 3-2 winners in an action-packed match away at RCD Espanyol.

The team raced into a three-goal lead before the break, with Lamela scoring after just 45 seconds before academy graduate José Ángel Carmona scored his first two goals for the club on only his second start.

However, a debatable penalty on the stroke of half time gave Espanyol a way back into the match, and a goal from Braithwaite on the hour mark meant that Sevilla had to fight hard to maintain their lead, especially after being reduced to ten men when Lamela was dismissed. The team managed to hold on and secure three precious points.

The hosts were in high spirits after a win at San Mamés last week, and those spirits weren't dampened when we took the lead after just 45 seconds. José Ángel played a lovely ball to Lamela down the right-hand side, who kept his cool and rolled the ball through Álvaro Fernández's legs with the outside of his left foot for the opening goal.

Braithwaite came close to levelling not long after for Espanyol, before En-Nesyri drew a good save from Fernández after a quarter of an hour.

The second goal came midway through the first half. En-Nesyri rose highest to head towards goal at an Acuña corner. Fernández kept the initial effort out, but José Ángel was on hand to convert the rebound for his first goal for the club.

Lamela nearly added his second just a few minutes later after good work from Óliver Torres on the counter attack, but his effort was blocked. However, it was José Ángel who would get a brace, as he pounced on a loose ball inside the area and prodded the ball home. 3-0 to Sevilla in the 45th minute

However, the hosts struck back right on the stroke of half time, as they were awarded a dubious penalty after an alleged handball by Acuña. Joselu hammered it into the corner to pull a goal back, with Bono agonisingly close to a superb save. That would be Acuña's last involvement in the game, as he was withdrawn at the interval for Alex Telles.

Espanyol would go on to cut the deficit to just one goal on the hour mark. Braithwaite found himself unmarked in the area and headed towards goal. Bono denied his header, but it fell straight back to the Danish international who converted at the second time of asking.

In what a physically testing affair, Lopetegui made changes, bringing on Nianzou and Rekik to sure up the defence, with Navas and Rakitic being sent onto the pitch a couple of minutes later.

However, the team had to really dig deep when Lamela was sent off for a second bookable offence in the 84th minute. At times, they even had to play with nine men, but Fernando dragged himself through the pain.

Espanyol continued to throw numbers forward, and had a number of shots which would have seen them equalise, including an 101st minute header that went wide. However, after an enduring affair, including twelve minutes of added time, the team held on for a vital three points.

That result means the winless streak is over, and also puts an end to a run of three consecutive defeats. However, it's now time to get the first European win of the season, with the team travelling to Copenhagen in midweek for their first UEFA Champions League away match of the season.