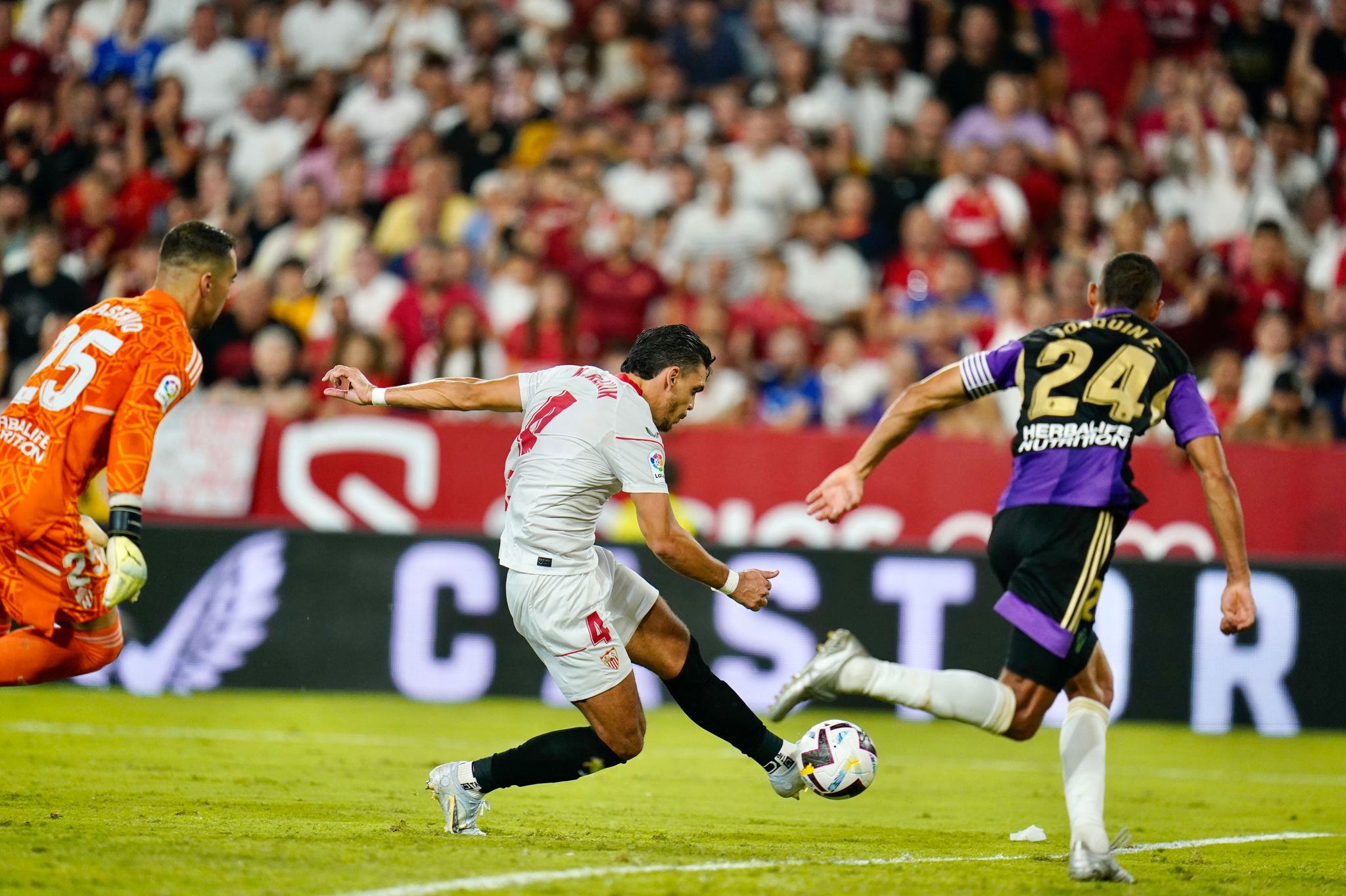 The team wanted to get back to winning ways at home against Valladolid and get three points in the first match back at the Ramón Sánchez-Pizjuán. It wasn't to be with points shared between the two teams.

Sevilla dominated the match but could not find the right finish to open the scoring despite having good chances. Valladolid were able to finish one of their few good chances through Anuar.

That late Valladolid goal forced Sevilla to throw the kitchen sink at the opposition's goal in hope of an equaliser. It did come through Rekik making the most of a mix-up between defender and goalkeeper. Despite a late push from the team, there wasn't enough time to go the full way and get the winner.

Despite the first half finishing goalless, it was an exciting half with some great play from Sevilla, who certainly deserved to go into the break in the lead.

The team started well, pressing high and even had a good chance in the first minute with Rafa Mir sending wide an Acuña cross.

The pressure was such that the team had six corners in the first fifteen minutes of the game, with Rekik and Niaznou almost heading in. Valladolid struggled to get any real time on the ball.

With the half approaching the halfway mark, Sevilla would have their best chance. Lamela pulled out a wonderful reverse pass to leave Rafa Mir alone in front of goal, but Asenjo was able to save the striker's effort.

Valladolid began to get into the team, seeing more of the ball. They even had a great chance to go into the break in the lead when Bono pulled off a top save to deny Guardiola.

The second half started with Sevilla on the attack again as Óliver sent a shot wide of Asenjo's goal. Time would go on though and with no goal coming, Lopetegui made his first changes, bringing on Ocampos and En-Nesyri.

Isco made his debut with 20 minutes to go

Following Nianzou, we would have another debut. This time, Isco Alarcón. The midfielder came on with 20 minutes to go with much fanfare as Lopetegui looked to find the key to unlocking Valladolid's defence.

The team began to wane though against the lack of a goal and Valladolid worked their way into the game. Monchu fired wide, worrying Bono. Lopetegui made his last changes, bringing on Telles and Rakitić.

A goal would come, but not for the side we wanted. Anuar worked his way through a few players and, with their second chance of the game, placed the ball past Bono, putting Sevilla agains the ropes in their own stadium.

Fortune would strike for Sevilla, however. In the 85th minute, Rakitić sent a lofted ball into the box that En-Nesyri got his head on. It seemed to be heading straight into Asenjo's hands, but a mix-up between the goalkeeper and Joaquín left Rekik with an open net and he made no mistake.

The momentum of the team was brought to a quick halt through a touchline fracas which saw El Yamiq and Acuña sent off. It resulted in eight minutes of injury time, but the team weren't able to find the goal both players and fans longed for.