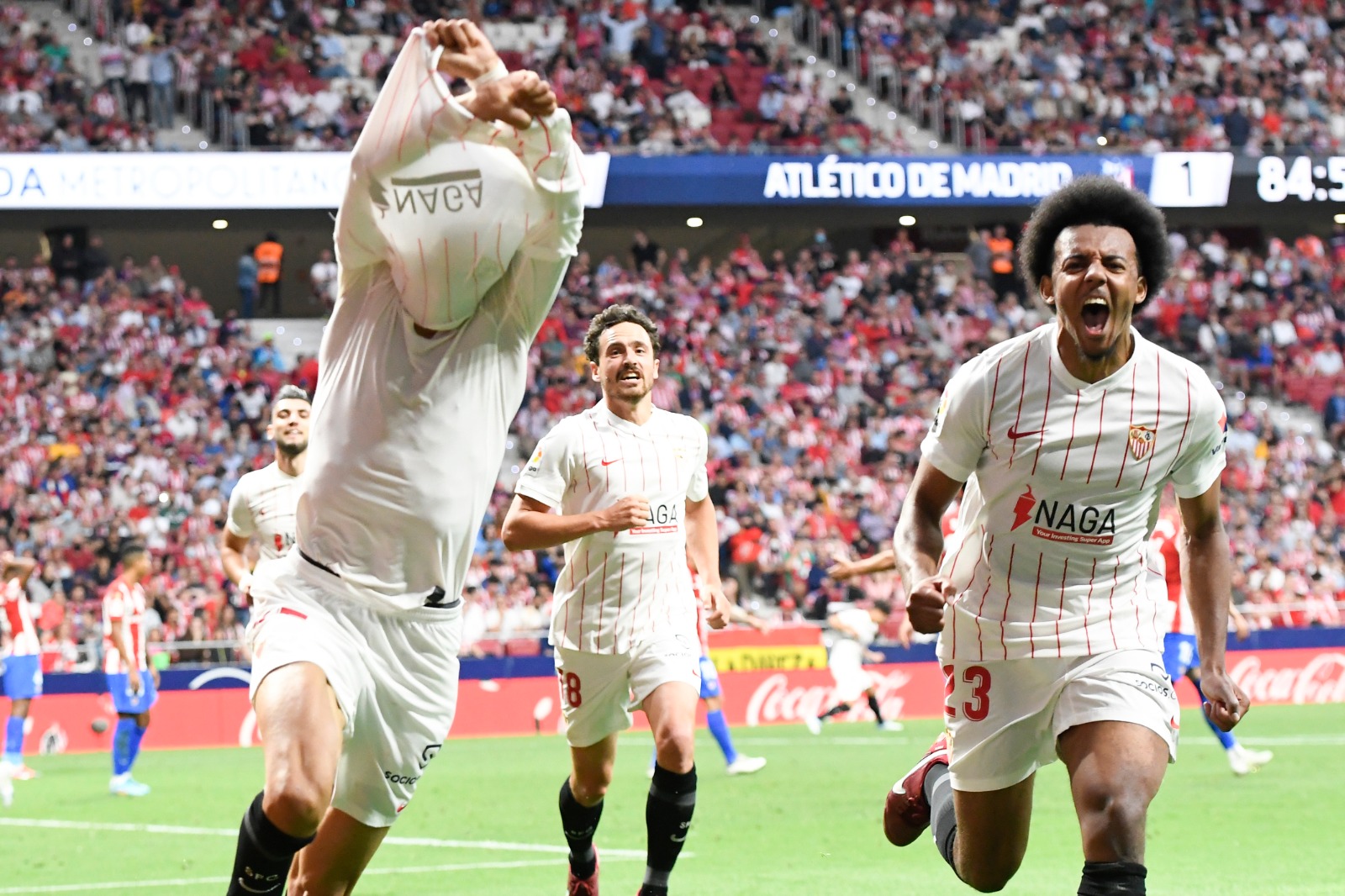 1-1: SEVILLA DRAW AT THE WANDA TO SEAL A PLACE IN THE CHAMPIONS LEAGUE

Sevilla FC are a UEFA Champions League outfit once again. Tonight's hard-fought draw at the Wanda Metropolitano in the penultimate league match of the season sealed the one point that was necessary for Julen Lopetegui's side to confirm a top-four finish. As the match drew towards its conclusion, En-Nesyri rose highest in the area to head beyond Oblak, cancelling out Giménez's opener and securing a place in the Champions League. The visit of Athletic Club now has significantly less pressure riding on the tie, but Sevilla will still look to finish third by bettering Atlético's result in San Sebastián. However, the team have fulfiled this season's objective after a gruelling ten months, and will be able to celebrate with their fans next Sunday at the Sánchez-Pizjuán.

Sevilla FC suffered in the first half, and they not only went into the break a goal behind. Real Betis were leading at home to Granada CF, which further piled the pressure on the team as our cross-city rivals looked to leapfrog us into Europe's elite competition. Sevilla did not start well in the capital, with the hosts having early chances from Luis Suárez and Reinildo, but neither could hit the target. Those early chances forced the visitors into creating some of their own, particularly through En-Nesyri, who came close with an effort on the counter, but the Moroccan could only drag it wide. However, a few minutes later, Atlético took the lead. Giménez met Carrasco's corner at the near post and headed high beyond Bono. With both Betis leading and Sevilla trailing, Sevilla led their rivals by just two points and would not be able to secure a top-four finish on the night. No further chances came about before the break.

Sevilla FC pushed forward in the second half and had shots, but the hosts also came close to extending their lead

Lopetegui made a double change at the interval, bringing on Tecatito and Jesús Navas for Ocampos and the already-cautioned Montiel. It was the Mexican who would create the first opportunity of the half, as he broke down the left wing, but he could not find a teammate. Gudelj would then block a shot from Carrasco moments later. The match became quite end-to-end at that point, with Oblak keeping out a long-range effort from Papu. Luis Suárez then looked to score on his final home appearance for Atlético, but his header went wide. Papu was then again denied by Oblak.

That end-to-end nature of the match began to dry up after 60 minutes, and two more substitutes were introduced in the form of Óliver Torres and Rafa Mir as Lopetegui looked for an equaliser. However, it was the hosts who would closest, with Bono making a crucial save to deny Carrasco's powerful drive. Savic then went close after a free-kick, with Sevilla FC struggling to stay afloat. They would gradually push on as they went all-out for the leveller. En-Nesyri nearly met a Navas cross with a quarter of an hour remaining, before sending a powerful header from Óliver Torres' onto the crossbar just a few minutes later.

The goal finally came. Deserved, of course, based on their late efforts and their bad luck in recent matches. Sevilla FC did deserve it, as did the goalscorer, Youssef En-Nesyri. Football owed him some luck, and he owed it to Sevilla. Another Óliver Torres cross found the Moroccan, but this time the striker, running onto the ball from the edge of the area, was able to beat the Slovenian keeper with a low, driven header. That means that Sevilla FC are once again a Champions League side, and will not have to face any last-day drama when Athletic Club visit the Ramón Sánchez-Pizjuán. The team suffered until Sánchez Martínez finally blew for full time, with Bono untroubled during the five minutes of added time.