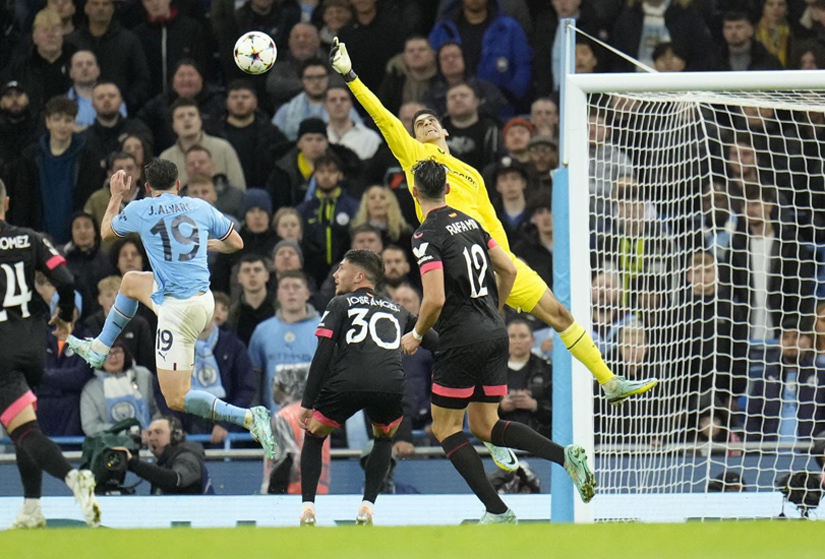 3-1: A DEFEAT TO ROUND OFF OUR CHAMPIONS LEAGUE CAMPAIGN

Entradilla
Rafa Mir gave us the lead in the first half, but goals from Lewis, Álvarez and Mahrez turned the game on its head.
Cuerpo Superior

Sevilla travelled to Manchester with nothing at stake but with the goal of competing and bidding farewell to the world's best club competition with a good result. Jorge Sampaoli's team partially achieved their goal, taking the lead at half-time with a header from Rafa Mir, but falling behind in the second half when City, through Lewis, Julián Álvarez and Mahrez, took advantage of defensive lapses to get their teeth into the game and take three more points from the top of Group G.

To make matters worse, signs suggest that the Argentinian coach has lost Marcão in the centre of defence, who asked to be substituted after suffering an injury as the first half drew to a close.

The game had nothing at stake and was therefore perhaps more open than expected at the start. The first minute had barely elapsed when the first Sevilla chance arrived, with Rafa Mir stealing the ball and linking up with Papu, but the striker himself failed to capitalise with a deflected shot over the crossbar. Palmer responded a minute later after a poor delivery from Bono, but the English player's shot went just wide of the top corner.

After that test of strength between the two, it was City who took the ball and began to push Sevilla back into their area, but they were unable to find the net. Ruben Dias sent a shot wide after a tussle with Marcão, while shortly afterwards it was Foden who shot narrowly wide of Bono's net. It was City's only shot on target in the first half.

Isco assisted Rafa Mir's header from a perfect corner to make it 1-0.

Sevilla, though, were struggling to beat Ortega, who had to be called into action after 20 minutes when Rafa Mir shot wide after a fine pass from Delaney's midfield. Mir had a trial run of what was to be his goal just past the midway point of the first half, with a header from Acuña's cross that skimmed just wide of the post. Shortly afterwards, at the other post and from a corner kick taken by Isco, Rafa stuck the ball in with the same technique to beat Ortega over the top.

It was a great goal to open the scoring and once again Man City began to dominate the game, although without the attacking clarity to which Guardiola's side are accustomed. Undoubtedly, the worst news of the match came in the first half with the injury of Marcão. The Brazilian did not hesitate to ask to be substituted when he felt some discomfort and his place was taken by Nemanja Gudelj.

Sampaoli made a double change after the break, bringing on Telles for Acuña and Suso in place of Papu Gómez. City, who had already pressed for an equaliser before the interval, soon occupied Sevilla's half with their constant possession. It was seven minutes in when they found the equaliser, as Julián Álvarez found a good opening on the right and created a chance for the youngster Lewis, who equalised for the English side.

Shortly afterwards Ruben Dias had a chance from a corner, but Bono responded spectacularly with a spectacular one-handed save. The game was getting lively and Sampaoli kept moving the bench to give minutes to Lamela and Jordán. Between the two changes, Rafa Mir failed to capitalise on a good counter-attack and had a shot go over.

Although City persisted, Sevilla reached the final quarter of an hour of the game holding the English champions to a draw until a double stroke of genius. The substitute De Bruyne took advantage of a transition with the visitors' showing a high line to set up a perfect ball from the left for Julián Álvarez. The Argentinian, very cleverly, first let it run then hit it high and accurately, impossible to save for the Moroccan.

Guardiola's side were back on top heading into the home straight. The last few minutes were uncomfortable for a City side who were bringing on fresh players and who, with five minutes to go, took advantage of a slip by José Ángel to score through Mahrez. The maximum punishment for a team that doesn't forgive mistakes and that will play in the knockout stages after the World Cup. Sevilla will now compete in the UEFA Europa League, the draw for which takes place next week. The immediate focus is now on El Gran Derbi next Sunday at Heliópolis.

REFEREE: Orel Grinfeld, from Israel. No bookings were handed out.