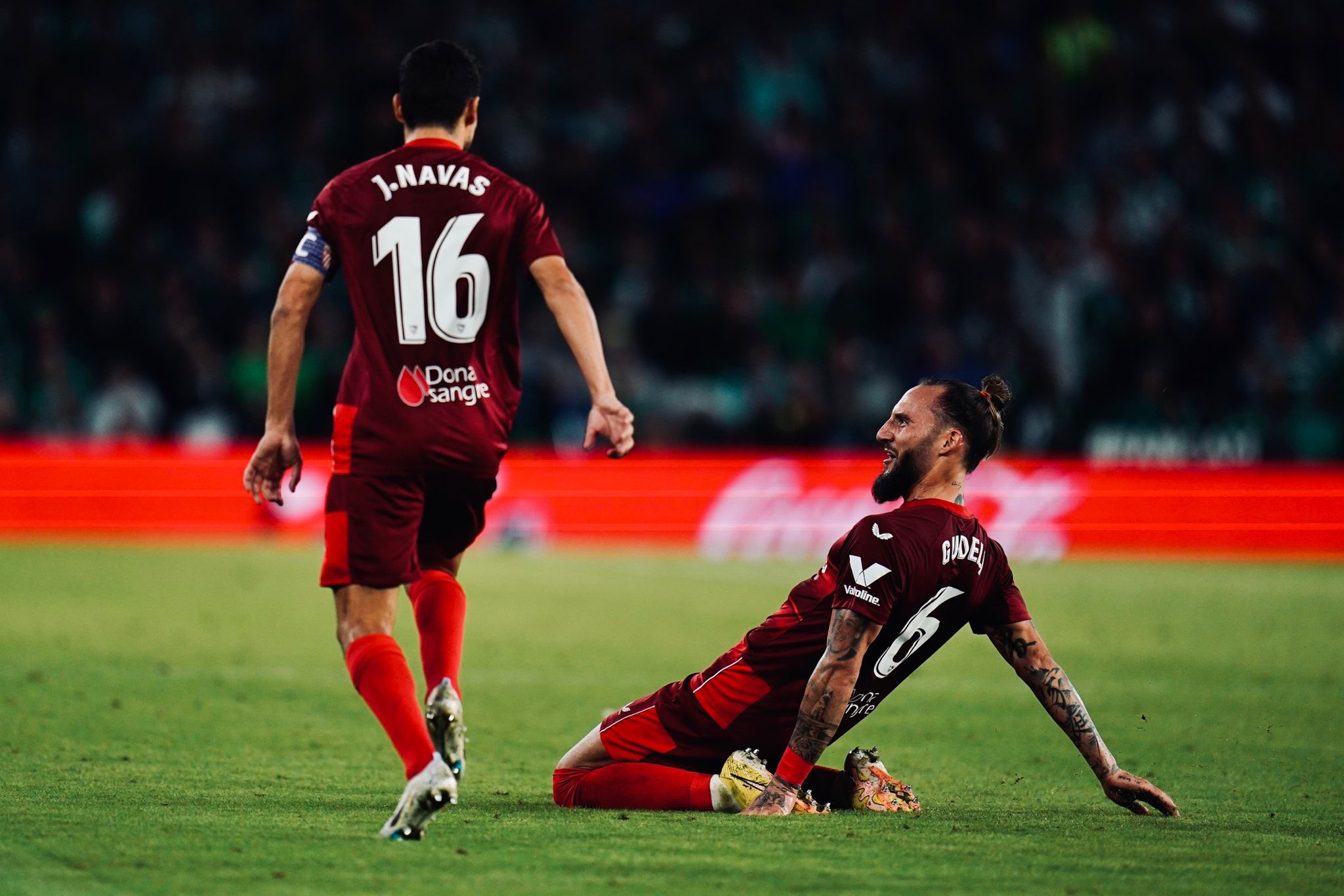 1-1: THE POINTS ARE SHARED IN AN INTENSE DERBY

Entradilla
Despite being a goal down and a man down just before half time, Sevilla went on to take control after Fekir and Borja Iglesias were dismissed. Gudelj leveled with a screamer from distance, and nearly added a late winner on two occasions
Cuerpo Superior

As the saying goes, there are no favourites in a derby. However, the reality continues to show that, even in the worst of situations, Sevilla FC rarely lose at the home of the old enemy.

Although the team will feel they deserved more than a point, and especially with their need to pick up wins and climb the table, they certainly proved to themselves that their current predicament can be turned around and that there is time to do so.

After Montiel saw red, the hosts took the lead a few minutes later, just before the interval, through a freak own goal which saw Gudelj's clearance cannon in off Navas. A goal down and a man down in first-half stoppage time.

However, the hosts failed to take advantage of this, and were reduced to nine men. Fekir saw red a few minutes before the interval, before Borja Iglesias was dismissed early on in the second half.

Sevilla took control of the encounter at this point, but their equaliser was not forthcoming until the 82nd minute when Nemanja Gudelj struck an effort from distance into the top corner.

In fact, he had a further two chances to secure a sensational comeback, but the points were shared after an enthralling encounter.

The derby began as most derbies too, with a lot of intensity but whilst trying to avoid a mistakes that would shift the balance of the match early on.

Bono was the first goalkeeper to be called into action, denying Guido with just six minutes on the clock. They went even closer to opening the scoring when a clearance from Rafa Mir came back off the woodwork.

Sevilla went for a more orderly approach on the ball, patiently looking for an opening. However, the best chance fell to Rafa Mir, who pounced on a weak backpass from Sabaly and rounded Claudio Bravo, but Edgar was on hand to clear it for a corner.

As for the hosts, they looked to break forward more quickly, and a quick break down their left-hand side lead to the dismissal of Montiel. His lunge on Álex Moreno was high, and with no chance of taking the ball. He was initially awarded a yellow card, but VAR upgraded it to a straight red.

This forced Sampaoli into a change just before the break, with Rafa Mir making way for Jesús Navas who took Montiel's place at right-back. Within a minute of his introduction, Navas would unfortunately be at the heart of the action, as a Gudelj clearance came off him and floated over Bono for the opening goal. 1-0 thanks to a freak own goal, and down to ten men.

A bleak situation for Sevilla, but, fortunately, the hosts were also reduced to ten men. In first-half stoppage time, Fekir's elbow on Papu Gómez was deemed to only be a yellow by Sánchez Martínez, but was then also upgraded to a red card after VAR intervened. 10 vs 10.

Just before the end of a long period of stoppage time, Borja Iglesias had a golden one-on-one chance to double their advantage, but Bono made a crucial stop. The half-time whistle followed shortly afterwards.

Sevilla dominated the clash after Borja Iglesias was dismissed

Sampaoli made one change at the break, bringing on Telles for Acuña, who had already been booked. Bono was once again called into action to deny a one-on-one chance, this time from Álex Moreno.

However, another change to the script was on its way. Borja Iglesias received the third red card of the match, again after an intervention from VAR, after an ugly challenge on Joan Jordán.

It was now 10 vs 9, and Sevilla took full control of the match, but without ever truly threatening Claudio Bravo or calling him into action. Sampaoli brought on En-Nesyri straight after the dismissal, but he stuck with three centre-backs until he decided to bring on Dolberg with fifteen minutes remaining.

However, despite opting to play with two strikers, a rarity for his Sevilla side, the goal would come from an unlikely source. Nemanja Gudelj let fly from over 25 yards and found the top left-hand corner, a very similar strike to his goal against Mallorca last month. 1-1 with eight minutes of normal time remaining.

Sevilla smelt blood and went all out to find a winner. Unbelievably, it was Gudelj who twice came closest to finding a winner. His volley from outside the area in the 90th minute crashed against the crossbar, before his shot in the dying moments drew a top save from Bravo.

The point does not do much to ease Sevilla's situation, but it does take them out of the relegation zone with one league match remaining before the break for the World Cup. That match is on Wednesday at home to Real Sociedad, which marks a big opportunity to take a huge step away from the relegation zone and go into the break on a high. Of course, Montiel will miss out due to suspension, but Isco Alarcón is available after serving his one-match suspension.