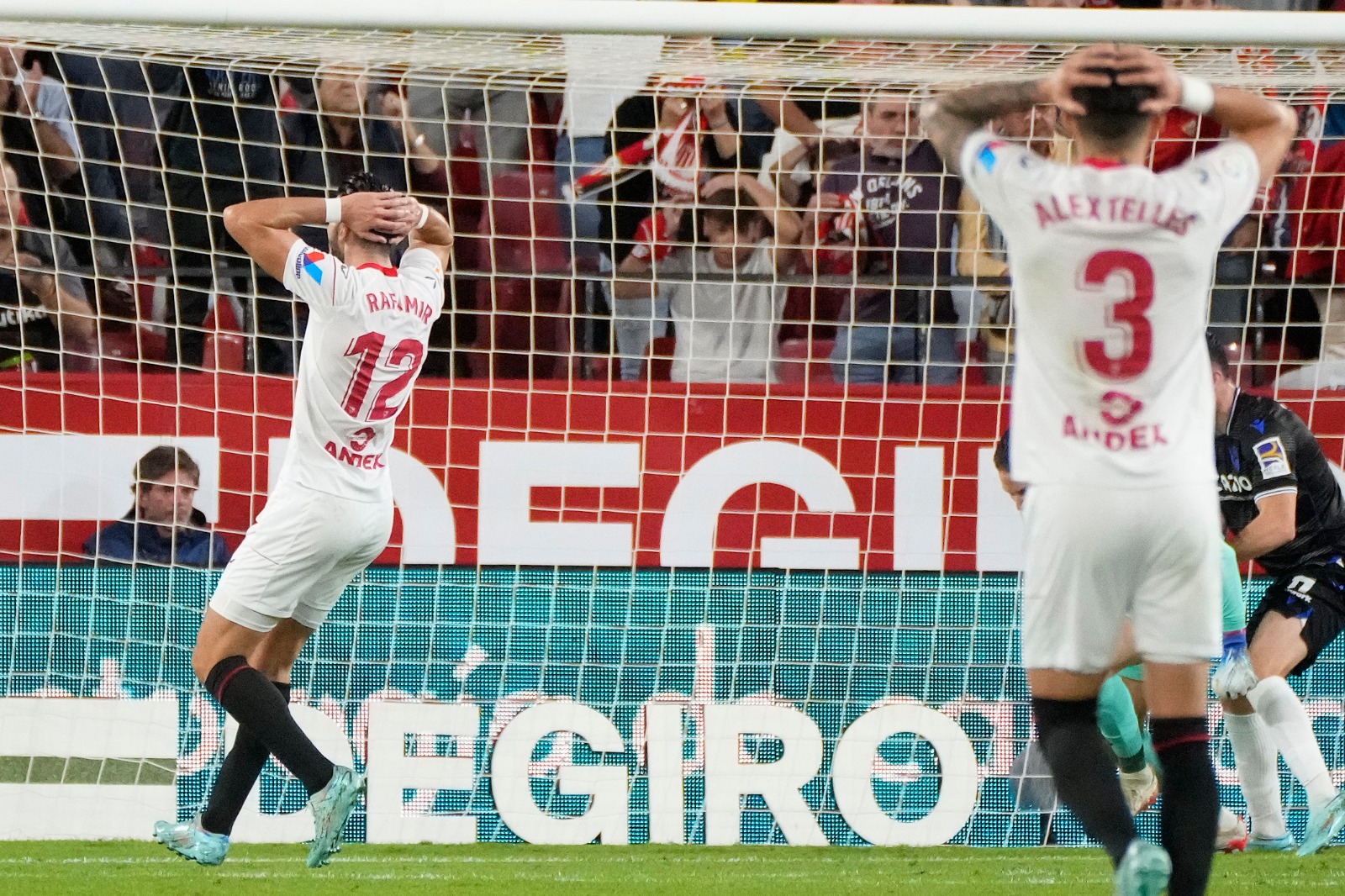 Entradilla
Sevilla FC were two goals down and two men down, but could not find two goals despite creating some chances
Cuerpo Superior

Sevilla FC are still waiting for their much-needed first league win at home. On this occasion, Real Sociedad took the game to Sevilla practically right after kick-off, with two sendings-off allowing them to dominate territorially and taking a 0-2 lead that the team could do little about.

Despite all this, the Sevilla side tried hard to cancel out goals from Sørloth and Bráis Méndez, with Rafa Mir pulling one back before the break. But the red cards for Rakitic and Nianzou took their toll, both physically and on the pitch, and the Real Sociedad side ended up taking all three points simply by keeping Sampaoli's side at arm's length.

There were 45 minutes of pure madness in the first half and unfortunately, very little happened in Sevilla’s favour, who eventually went in at half-time trailing after all that had happened. The first chance fell to Sevilla, although Gudelj was a little too close to Rakitic's delivery. Before that, Carlos Fernández had to come off injured in the 10th minute.

From that point on, Real Sociedad had everything to play for. First with a goal from Sørloth, who beat Bono after a pass from Mikel Merino. Sevilla's reaction came in the form of Isco, who almost from the penalty spot saw a good shot saved by Remiro with the outside of his right foot, sending the ball for a corner. Jesús Navas also had a shot from distance, but it failed to surprise Remiro.

As the visitors went on the counter, Rakitic made sure to bring down Bráis Méndez to stop the attack, but was dismissed by the referee after an intervention from VAR as he had inadvertently stepped on the Real Sociedad midfielder.

A second red card followed just six minutes later, as a tackle by Nianzou was deemed to be worthy of a dismissal, again after VAR intervened. 1-0 down in the 34th minute with nine men.

The second goal for the visitors came two minutes later, again with an assist from Mikel Merino, with Bráis Méndez poking the ball beyond Bono.

Despite being up against all the elements, Sampaoli's side managed to pull a goal back on the stroke of half time with a bullet header from Rafa Mir. Alex Telles provided the cross.

Naturally, Real Sociedad had most of the ball in the second half, pressed high up the field and looked for a third goal to definitively kill off the match. Sevilla were rarely able to control the game and had to rely on counter attacks. Sorloth then had a golden opportunity to score a third, but he could not get onto the end of the rebound after Bono denied Silva.

Sampaoli had made four changes by the 62nd minute as he looked for stamina and pace in case of any chances. The team had to play a 5-3-0 formation to deny the visitors any space.

En-Nesyri headed narrowly wide late in the second half

Real Sociedad continued to keep hold of possession and drew Bono into a string of saves. First up was an effort from outside the box from Kubo. However, Sevilla's best chance followed shortly afterwards, in the 77th minute, when En-Nesyri headed agonisingly wide from Telles' cross.

The fans really got behind the team after that chance as they looked for an unlikely equaliser. Bono was again called upon to deny Marín when he was clean through on goal.

However, the equaliser was not forthcoming, and Sevilla remain without a home win in the league this season.