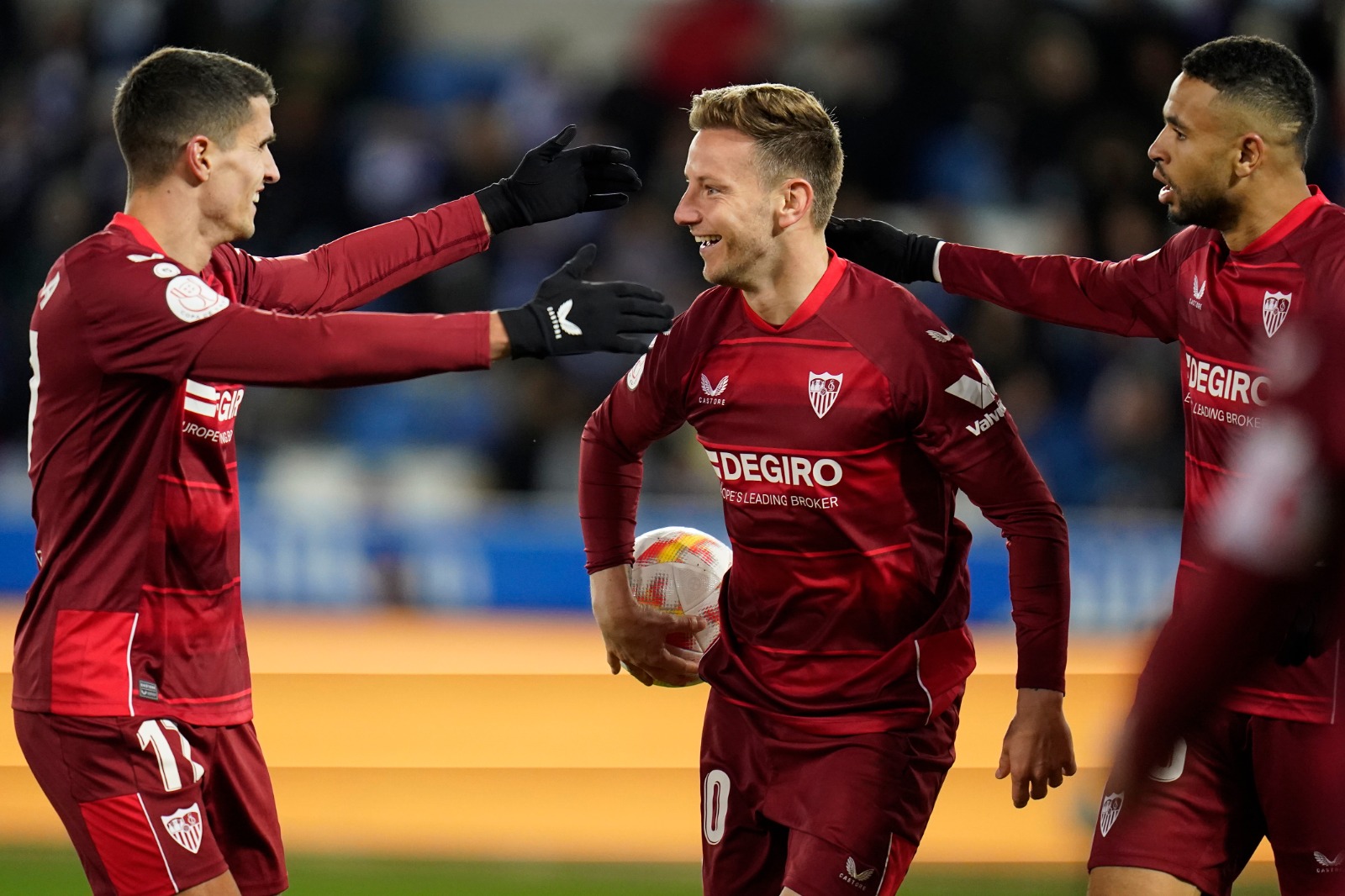 0-1: A HARD-FOUGHT WIN TO REACH THE QUARTER-FINALS

Entradilla
An excellent goal by Rakitic at the start of the second half allowed Sevilla, who found their feet as the match went on, to make the Quarter-finals of the Copa del Rey.
Cuerpo Superior

Still struggling to shake off their La Liga woes, Sevilla FC continues to make strides in the cup. On a chilly Tuesday night, they overcame Deportivo Alavés at Mendizorroza with a fine goal from Rakitic to book their place in the quarter-finals. Sampaoli's side were outplayed at the start by an incisive Alavés side, but as minutes passed they found a much firmer footing, especially in defence.

Sampaoli had already commented before the game that he was expecting a tough, attack-minded Alavés. And the Argentine was not mistaken, as the visitors forced two corners after barely a minute and a half of play. Luis García's men were quick to go forward in search of the first goal against a Sevilla side who, little by little, managed to get into the game. They lacked, however, that final pass to respond to a start in which the home side had the upper hand.

A counterattack, in fact, led Sylla to get in front of Dmitrovic, but a quick En-Nesyri on the rebound managed to turn the ball behind for a corner. The nerves derived from the team's situation were also noticeable in Mendizorroza, although a good Dmitrovic save managed to keep the score level. Toni Moya, midway through the first half, also had a shot from the edge of the area, but a rebound ended up going out for a corner.

Sevilla FC were unable to find their way, and after the first half hour of the game, Dmitrovic once again stood out with a fine save from Luis Rioja, who collected a rebound inside the area and shot low inside the post to force a great reaction from the Serbian. It was not until the 40th minute of the game that the first dangerous chance of the match came, a good tackle by Jordán which allowed Lamela to face up to the ball and shoot, but his shot went over Owono's crossbar.

After the restart, Sampaoli took off the cautioned Gudelj and Suso, bringing on Fernando and Jesús Navas. In the third minute of the second half, and with practically the first ball he touched, Navas put in one of his trademark crosses to the penalty spot, where Rakitic was on hand to nod the ball past the post to make it 1-0 and put his side ahead.

This goal changed the dynamic of the match and allowed Sevilla to relax a little, as we gained confidence from going ahead and had a clearer idea of how to approach the rest of the game. Alavés continued to attack, but now they found faced a side much better positioned at the back, who hardly gave away any chances.

Alavés' most threatening moment in the second half came from Jason, with a direct free kick after 55 minutes that was close to nestling in the top-right corner.

Sampaoli, after the two half-time substitutions, only brought on Nianzou in the final stretch to reinforce this settled backline and striker Rafa Mir, who tried to catch on to any chances from the counterattack.

Only one chance fell to the away side, as Lamela's shot from Rakitic's pass was blocked and went for a corner. Our opponents made various changes to try and grab an equaliser, most notably Duarte and Salva Sevilla.

Alavés went in search of an equalizer in stoppage time and had two clear chances, one from Jason that was well saved by Dmitrovic and another from Salva Sevilla, who shot just wide.

Sevilla FC leave Mendizorroza still in the competition and will find out their next opponent, who they will face in only seven days, this Friday at 13:00, with the draw taking place at the Ciudad del Fútbol de Las Rozas.