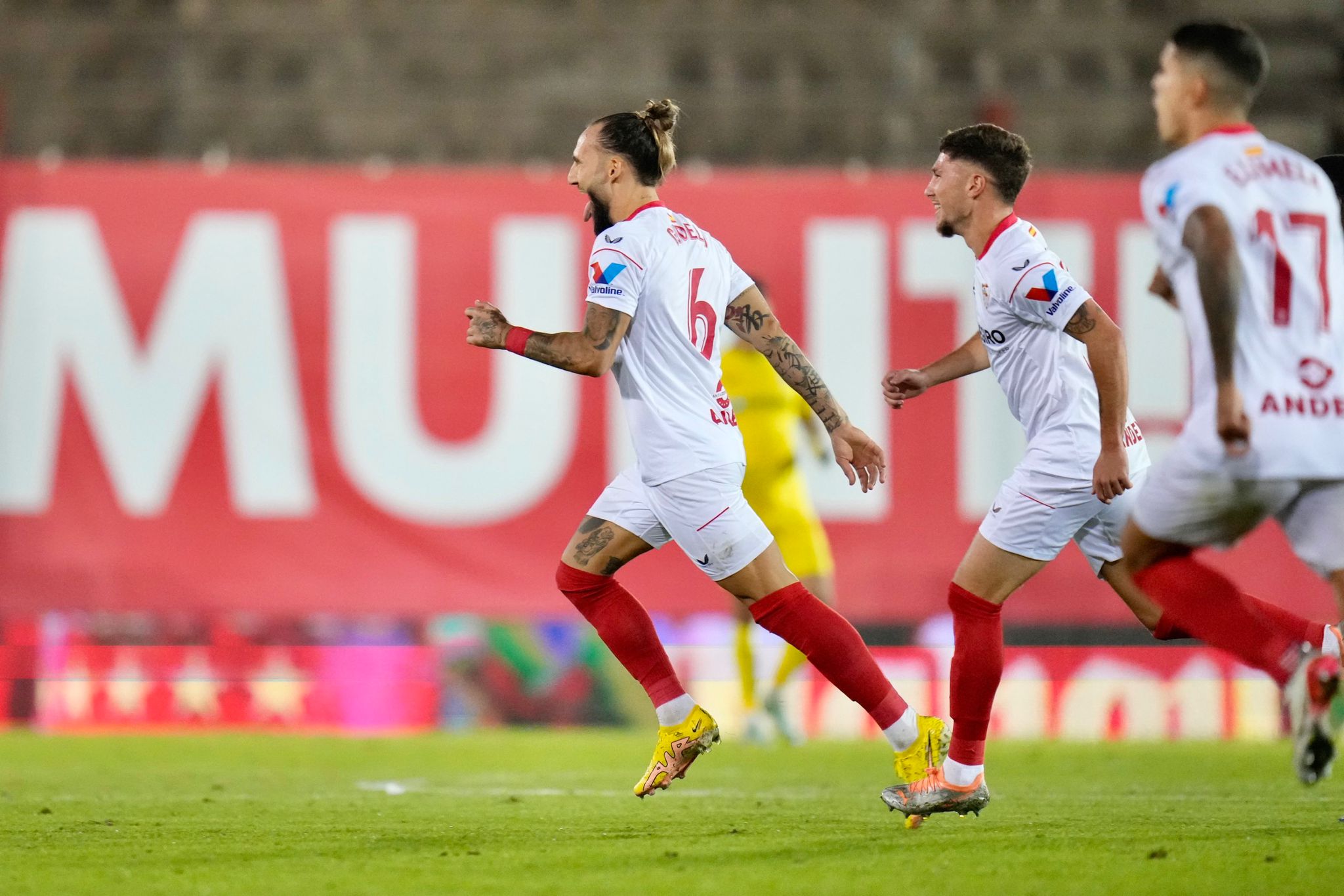 0-1: WONDERSTRIKE FROM 30 YARDS TO GET THE THREE POINTS IN MALLORCA

Entradilla
Jorge Sampaoli's long-awaited first win came on Saturday at the Visit Mallorca Stadium, thanks to Gudelj's stunning strike, which helped them get back to winning ways and climb out of the bottom half of the table.
Cuerpo Superior

The match gave Sampaoli the opportunity to get his first win and show that his changes so far have had an effect. Perhaps it didn't go exactly the way the coach had planned, but the team managed to get all three points, thanks to a great goal from Gudelj - his first since his arrival in 2019 - and a great performance from Bono, who made several saves to maintain the clean sheet.

A good defensive performance sealed the win against a Mallorca side that had a couple of clear chances to get something out of the match. But the second win of the season is already in the bag and with it, we move out of the relegation zone, in what will hopefully be the turning point for Sevilla after a difficult start to the season.

Sevilla have become accustomed to starting games better than our opponents recently, something we were unable to repeat against a Mallorca side who came out all guns blazing towards Bono's net. In just seven minutes they had three shots on goal, all of them clear goal-scoring opportunities, with which they threatened to open the scoring.

The Sevilla goalkeeper was at his usual high standards to turn the first attempt behind for a corner and instinctively stick his arm out to deny the second.  Sevilla found it difficult to get out of their own half at the start, although the Mallorcan attack eventually began to lose steam. Sampaoli's side then gradually began to have more possession of the ball and started making more advances into the Mallorcan territory.

Despite a difficult start, as time went on Sevilla began to gain control

Sevilla failed to trouble Rajkovic throughout the first half, despite attempts down the flanks and crosses into the box that didn't amount to anything. Isco and Lamela, the most forward players on the pitch, were forced to delay their runs in order to get into the game. As the minutes wore on, Aguirre's men even gave up counter-attacking and focused their efforts on avoiding trouble at the back, something they achieved with a virtually seamless system of play.

The big downside of the first half was the bookings, with Montiel, Marcão and Lamela all going back to the dressing room with yellow cards to their name. The Argentinian coach was forced to make his first change of the game as Jesús Navas, a little shaky in the first half, made way for José Ángel as the team came out for the second half.

In his fourth season at Sevilla, Gudelj finally got his first goal

After the interval, things didn't change all that much and Sevilla continued to push forward against a well-structured Mallorca side. Then up stepped Nemanja Gudelj, who chose the perfect day to get off the goalscoring mark as the striker scored after more than a hundred matches in a Sevilla shirt.

The Serbian's spectacular right-footed wonder strike from 30 yards out slipped into the top right-hand corner of his compatriot Rajkovic's net, who, no matter how hard he stretched, was never getting close to preventing the goal. The all-important goal forced Mallorca to go against the run of play and to push forward in an attempt to put things right. Sampaoli brought on Acuña and Papu Gómez to reinforce his formation and tried to keep the ball circulating to avoid as much trouble as possible.

Even so, Bono had to step in again to prevent the equaliser in the clearest chance Mallorca had throughout the entire game. A defensive error with a high line and a piercing run by Lago Junior, allowed the winger to play the ball to Ángel who tested Bono to his limits. Marcão had to make a vital clearance too when the rebound seemed destined for goal. That was the end of the Balearic side's chances, although the tightness of the score and the situation meant that caution was needed right until the final whistle.

Fortunately, the three points are on the plane to Sevilla and the team escapes the doldrums of the relegation zone and can begin to look to the future with a very different attitude. This Tuesday they will be at home against Valencia, with a chance to fully turn the page on our period of poor form.